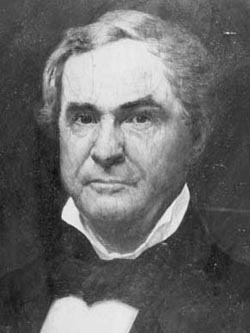 John Fletcher Darby, congressman and banker, was born in Person County, near Roxboro, but the names of his parents do not appear to be recorded. At the age of fifteen, he moved with his family to Missouri, probably rural Warren County, where his father engaged in farming. His education in local schools was fragmentary. In 1825 the family moved again, this time to Frankfort, Ky. There Darby began to read law and was admitted to the bar. He subsequently located in St. Louis, Mo.

Immediately active in the political life of that mid-western city, in 1835 Darby was elected its mayor at age thirty-two. Three years later he was a successful candidate for the Missouri state senate, though he continued to serve as mayor of St. Louis for three full terms through 1841.

After fifteen years in public life and practicing law, Darby was elected to Congress on the Whig ticket. He served two years in the Thirty-second session (1851–53). When he returned to St. Louis, he spent the rest of his life as a banker and was a respected financial adviser in the mid-century expansion of that area for nearly thirty years.

Darby died in his seventy-eight year at his home near Pendleton Station in Warren County, Mo., and was buried in Calvary Cemetery, St. Louis.