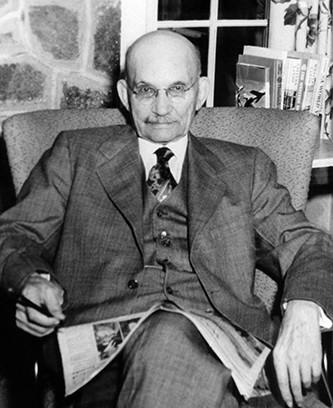 Blanford Barnard Dougherty, teacher, college president, state leader in public education, and influential politician, was born in Boone of Irish and English ancestry. His father, Daniel Boone Dougherty, a Confederate veteran, settled in Boone soon after the close of the Civil War and became a leader of the town and county. His mother was Ellen Bartlett, whose father was a hotel owner and a leading citizen in Jefferson and Ashe County in the 1800s.

Boone was a small, isolated mountain community when Dougherty was born and it had severely felt the effects of the recent war. He qualified as a public school teacher at age eighteen, taught several terms, and then entered Carson-Newman College, Jefferson City, Tenn., where he was graduated in 1898. That fall he enrolled at The University of North Carolina and the following year was granted a B.Ph. degree. On returning to Boone, he became superintendent of Watauga County public schools, serving about sixteen years. On 5 Sept. 1899, he and his older brother, Dauphin Disco, opened Watauga Academy, mainly for the training of public school teachers to serve the "lost provinces" of the state. He also led the fight in the state legislature to establish Appalachian Training School for teachers (now Appalachian State University). The school was chartered 18 Mar. 1903 with "Prof. B. B. Dougherty" as its head, a position he held for fifty-five years.

From early in the century, Dougherty visited counties throughout the state to study their tax systems; he became an authority in that field, and was appointed to the State Board of Equalization in 1927. Two years later, he wrote the Hancock School Bill and soon afterward was named to the state Board of Education by Governor O. Max Gardner; he served on the board for twenty-six years. In 1916 he was a member of the state textbook committee and in 1937 was chairman of the state's Committee on Salaries. From 1943 to 1950 he was on the Board of Trustees of the North Carolina Baptist Hospital, Winston-Salem. In 1946 he was named president of the Northwestern Bank, serving eleven years. In 1950, the North Carolina Citizens Association, Inc., commended him as the number-one man of the state.

A truly great day in Dougherty's life was 7 July 1949, when the county observed "Education Day" in celebration of its one hundredth anniversary and his fiftieth as an educator. The event drew noted figures from the nation's capital and from North Carolina. Those who spoke ranked him at the top in developing the state's public school system and making other worthy contributions.

Dougherty held honorary degrees from Elon College (D.Litt.) and Wake Forest College (Dr.Ed.). He was a Southern Baptist and a Democrat, and never married. His name is inscribed in the state's Education Hall of Fame. He was buried in the city cemetery in Boone.

O. Lester Brown, Blanford Barnard Dougherty—A Man to Match His Mountains (1963), interviews with members of the Dougherty family, and personal knowledge from an acquaintance with Dougherty extending from 1912 until his death.