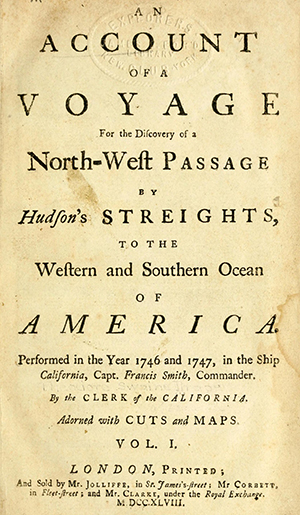 Theodorus Swaine Drage, Anglican clergyman, explorer, and author, was the grandson of William Drage (1637?–1669), a medical writer of Northamptonshire, England, and the son of Theodorus and his wife, Mary Bowen Drage, who also had a son named William. The younger Theodorus is said to have been "a school Fellow of Lord Hillsboroughs," but nothing further is known of his early education except that he later noted that he was prepared as a youth for the church. William matriculated at Oxford in 1726; Theodorus Swaine was admitted at Gray's Inn, London, to study law, in 1737. The register lists him as "Drage, Theodore, of Greenwich, late of the office of Clerks of the Rolls, gent."

Drage and Arthur Dobbs, afterward governor of North Carolina, probably became acquainted through some service rendered by Drage, and Drage served as "clerk" on a voyage in 1746–47 in search of the North-west Passage of which Dobbs was sponsor. Drage is considered to have been the author of An Account of a Voyage for the Discovery of a North-West Passage by Hudson's Streights, published in two volumes (London, 1748–49), and of The Great Probability of a North-West Passage (London, 1768); dedicated to the Earl of Hillsborough. (Drage often appears in contemporary records as Swaine Drage and sometimes, apparently, as Swaine, but Theodorus Swaine Drage beyond doubt was the "clerk" on the voyage and the books are identified as having been written by the clerk.) Dobbs became governor of North Carolina in 1754 and by 1758 Drage was living in Philadelphia as partner in the firm of Croghan & Drage, primarily selling wines and liquors. By 1768 he appears to have been studying again for the ministry; the following year he was in London where he was ordained deacon on 21 May and priest on 26 May 1769. Licensed by the Bishop of London, he prepared to sail to North Carolina. Lord Hillsborough may have arranged the position for his old schoolmate; William Tryon was then governor of North Carolina and Mrs. Tryon and Hillsborough were related. Tryon was described by Drage as being "a Family acquaintance." Benjamin Franklin was one of Drage's sponsors.

After a long passage at sea, Drage landed on the Outer Banks in November and made his way to New Bern to call on Governor Tryon. The governor promptly informed the vestry of St. Luke's Parish, Salisbury, that Drage would be assigned there for two or three months to give both the people and the priest an opportunity to determine whether the assignment might prove agreeable. If so, the governor would make the appointment permanent. Inhabitants of Rowan County had recently requested the governor to assign an Anglican priest to St. Luke's. Although Drage encountered resistance from the vestry (elected by all freeholders), he was cordially welcomed by many individuals who agreed to support him financially if the vestry failed to do so.

Within six months Drage had established twenty-six preaching stations around the county; some chapels were constructed and others planned. At the end of two years he reported that he had baptized over eight hundred persons and organized forty congregations among about seven thousand people. Nevertheless, he was operating outside the established channels as the elected vestry declined to accept him, or, indeed, to hold a formal meeting to discuss his acceptance. By withholding his salary, the vestry made Drage's position untenable, and it apparently was early in 1773 that he accepted an invitation to remove to Camden, S. C. He died there between October and December 1774. His will, drawn on 5 October that year, left his worldly goods to his "wife Hannah Swaine Drage in Philadelphia" and continued, "As what I cou'd devise to my children would be so inconsiderable and difficult to be got to their hands, I recommand them to the blessing of Almighty God." One of his children was Charles Swaine Drage who in 1759 married Hannah Boyte in Christ Church, Philadelphia.

[Title page]. An account of a voyage for the discovery of a north-west passage by Hudson's streights, to the western and southern ocean of America : performed in the year 1746 and 1747, in the ship California, Capt. Francis Smith, commander. London : Printed and sold by Mr. Jolliffe. 1748. https://archive.org/details/accountofvoyagef01swai (accessed November 22, 2013).