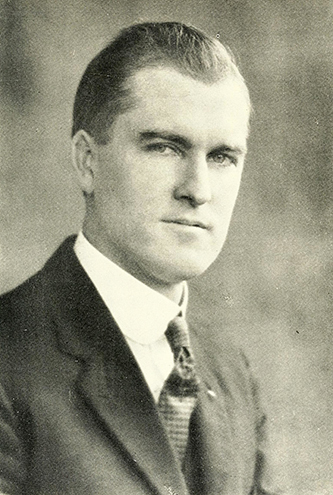 Ward Blowers Edwards, educator and college administrator, was born in Troupsburg, Steuben County, N.Y., the son of Charles Perry and Mary Livonia Blowers Edwards. He was educated in the public schools in New York and Colorado, where his family moved in Edwards's early childhood. He entered upon a career in teaching and educational administration after receiving an A.B. degree from Wake Forest College in 1912, serving successively as principal of Grifton High School (1912–15), principal of Jackson High School (1915–18), and superintendent of Weldon City Schools (1918–24). Meanwhile, he had been awarded an M.A. degree by Columbia University in 1920.

In 1924 Edwards was appointed professor of German and Latin and dean of Chowan College. A major portion of the administrative duties of the college was left to Edwards during the last months of the tenure of President C. P. Weaver (1923–25) and throughout the presidency of W. R. Burrell—the former being in ill health and the latter having major responsibilities as pastor of the Murfreesboro Baptist Church and as professor of Bible at the college. Recognizing his administrative talents, the board of trustees elected Edwards to succeed Burrell as president of Chowan College, effective 1 July 1926, a position he retained until his death.

An overriding concern throughout the decade of Edwards's administration was that of maintaining the educational standard recently attained by Chowan College. The institution had been recognized by the North Carolina Department of Education as a standard four-year college in 1925. Edwards aimed to increase its educational prestige through the attainment of accreditation by the Southern Association of Colleges and Schools. The maintenance of the former standard alone depended upon a guaranteed annual income of $50,000, with at least one-third of that amount having to come from sources other than student fees. Edwards advocated a policy that had been envisioned by his predecessors: the vigorous pursuit of an effort to raise an endowment of at least $500,000. The proceeds from such an endowment—together with other anticipated nonstudent revenues—would guarantee the annual operation of the college as a standard senior college for purposes of teacher certification by the North Carolina Department of Education. It would also ensure the college's eligibility for membership in the Southern Association of Colleges and Schools. It was largely through Edwards's efforts that an initial "challenge" gift of $25,000 toward his endowment goal was secured from the Benjamin N. Duke Trust. Within a year the friends of the college, under the tireless leadership of Edwards, had met the terms of the Duke challenge by pledging an additional $50,000 toward general endowment. By mid-1927 Edwards reported an endowment total of over $100,000 on hand, in cash, securities, or pledges.

After 1929, however, it became apparent that other measures would have to be employed to meet the annual operating costs of the college in order to maintain a standard rating. Anticipated nonstudent revenues had failed to materialize. Indebtedness increased as the college borrowed funds against operating deficits. The meager endowment funds were gradually depleted in the effort to make payments on loans, or to serve as collateral for the purpose of securing loans. The Baptist State Convention ceased its financial support of Chowan altogether after 1931.

In the face of these adversities, Edwards proposed and pursued several measures that were designed to maintain the educational standards of the college. An abortive attempt was made in 1930 to coordinate the curricular offerings of Chowan College with those of Wake Forest. As envisioned, the arrangement would have eliminated some of Chowan's financial burden; more importantly, it would have aligned Chowan's degree programs with an institution already accredited by the Southern Association. In 1931 males were admitted as full-time students to the previously all-female college, a course clearly designed to produce additional revenue. In the same year, efforts were projected to engage one hundred friends of the college who would provide scholarships of $100 each to meet operating costs for the following year. By May 1932, however, Edwards had to report that the college owed over $40,000 to its creditors, including back pay due the faculty and staff. The problem of meeting financial obligations to Chowan's creditors remained a pressing concern throughout the last years of Edwards's administration, despite various schemes to reduce operating costs and to obtain additional revenue from alumnae and friends of the institution.

Edwards was a Democrat, a Mason, and a Baptist. He married Cinderella Stanley of Northampton County on 26 July 1916. They had no children.

Originally interred in the Cedarwood Cemetery at Weldon, Edwards's remains were later moved to Riverside Cemetery, Murfreesboro, to be buried beside his wife who died in 1942. A portrait commissioned by the Chowan College Alumnae Association, and painted by Francis Speight, was presented to the college in 1936.