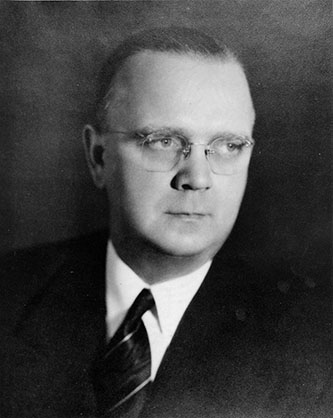 Paul Neff Garber, clergyman and educator, was born at New Market, Va., the son of Samuel and Ida Neff Garber. He was raised in the Church of the Brethren and educated at Bridgewater College, Bridgewater, Va. (A.B., 1919), Crozier Theological Seminary, and the University of Pennsylvania (M.A., 1921; Ph.D., 1923). After teaching for a year at Brown University, he joined the department of history of Duke University in 1924. Two years later, he was ordained to the ministry of the Methodist Episcopal Church, South, and became a member of the original faculty of Duke Divinity School. In 1928 he was professor of church history and in 1941 dean of the Divinity School. In the 1920s Duke University established a summer school at Lake Junaluska, which was held annually for about fifteen years with Dr. B. G. Childs of the university faculty as first dean and Garber his successor. In 1939, Garber was a delegate to the Uniting Conference in Kansas City. He never held a pastoral appointment.

In 1944, at the Southeastern Jurisdictional Conference at Atlanta, Garber was elected to the episcopacy, the first clergyman with an earned doctorate to be chosen for this post by the jurisdiction. Initially he was assigned to the Geneva area, which included Methodist work in North Africa, Switzerland, Belgium, Spain, Yugoslavia, Hungary, Austria, Bulgaria, Poland, Czechoslovakia, and the Madeira Islands. In 1951 he succeeded William Walter Peele (1881–1959), a native of Gibson, N.C., as bishop of the Richmond area, which included the Virginia and North Carolina annual conferences (fifty-six easternmost counties), one of the largest episcopal areas. As his final post, he was assigned in 1964 to the newly created Raleigh area of the Methodist church with his office in Raleigh. When he retired from the episcopacy in 1968, he was succeeded in the Raleigh area by Bishop William Ragsdale Cannon, a native of Georgia. Garber was instrumental in founding the No-Silent-Pulpit program, the Ten Dollar Club for church extension, North Carolina Wesleyan College at Rocky Mount (1956), and Methodist College at Fayetteville (1956). Garber Chapel in the North Carolina Conference was named in his honor. After his retirement, he resided in Geneva.

Garber was the author of That Fighting Spirit of Methodism (1928), The Romance of American Methodism (1931), John Carlisle Kilgo: President of Trinity College, 1894–1910 (1937), The Methodists Are One People, The Methodist Meeting House (1941), and The Methodists of Continental Europe (1949). He was a contributor to Methodist Magazine (founded in 1962) and a member of the editorial board that supervised preparation of The History of American Methodism (1964) in three volumes, the first general history of American Methodism in several decades. In 1963 he was a member of the executive committee of the American Association of Methodist Historical Societies, and in April 1966 he was chairman of the General Bicentennial Committee of the Bicentennial Celebration of American Methodism in Baltimore and the originator of its theme: "Forever Beginning." Before retiring he was president of the council of bishops. Garber delivered a series of lectures at Gammon Theological Seminary, Emory University, Southwestern University, and Randolph-Macon College. He received honorary doctorates from Bridgewater College, Randolph-Macon College, Simpson College, Duke University, Emory University, and Washington and Lee University.

He was married twice: in 1927 to Orina Winifred Kidd and later to Nina Fontana of Geneva; no children were born to either union. Funeral services were held in the Cremation Chapel in Geneva, and a memorial service was held at Edenton Street United Methodist Church, Raleigh. His ashes were buried in the family plot in Oak Lawn Cemetery, Bridgewater, Va. Garber's library is at Randolph-Macon College and his papers are at the Methodist Building, 1307 Glenwood Avenue, Raleigh. A portrait hangs in the Methodist Building.

Joseph Mitchell, Episcopal Elections in the Southeastern Jurisdiction of the United Methodist Church (1971).