Katherine Everett Gilbert, educator and philosopher, was born in Newport, R.I., the daughter of Thomas Jefferson and Sue Morrison Everett. After attending local schools in Newport, she taught for a year in an 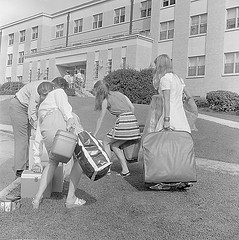 ungraded school at Mount Hope, Conn. In the fall of 1904 she entered Brown University, where she was graduated with a bachelor of arts degree in 1908 and a master of arts in 1910. During the master's program, she was an assistant in philosophy to Dean Alexander Meiklejohn and Professor Walter G. Everett. Continuing her graduate studies at Cornell University, she was a scholar and fellow in the Sage School of Philosophy and received a doctor of philosophy degree in 1912. On 1 Aug. 1913 she married Allan H. Gilbert. Two years later she became the assistant of Professor James E. Creighton, editor of the Philosophical Review at Cornell.

When her husband became associated with Duke University, Durham, Mrs. Gilbert accepted a post as Kenan Research Fellow in Philosophy at The University of North Carolina, Chapel Hill, where she worked from 1922 to 1929, the last year as acting professor of philosophy. In 1930 she was appointed professor of philosophy at Duke, and in 1942 she was named head of its newly established Department of Aesthetics, Art, and Music. Mrs. Gilbert was the first woman to become a full professor and, until the time of her death, the only woman to hold the chairmanship of a liberal arts department at Duke University, where she also was instrumental in inaugurating the Chamber Arts Society.

Early in her career, she joined the American Philosophical Society; later she was a member of the program committee, served a term as vice-president of the eastern division, and subsequently was elected president—one of the three women up to that time to hold the office. Other memberships included the International Spinoza Society, the Southern Philosophical and Psychological Association, the American Society for Aesthetics (president, 1947–48), and the American Association of University Women (member, National Committee on Standards, 1942–46). In 1938 she organized a program on the education of women for Duke's Centennial. The previous year she had served as a representative of the U.S. State Department to students of philosophy in Italy.

Mrs. Gilbert was a meticulous and prolific writer. Many of her articles appeared in the American Philosophical Journal ; she also reviewed numerous books for that and other journals and magazines. As a research student, she was continually accumulating information on subjects in her field that had received scant attention from others. Consequently, her works were highly creative. Principal among her published books are Maurice Blondel's Philosophy of Action (1924); Studies in Recent Aesthetics (1927); with Helmut Kuhn, A History of Aesthetics (1939); and Aesthetic Studies: Architecture and Poetry (1952). She was a contributor to Philosophical Essays: Studies in Honor of James Edward Creighton (1917). In 1942 she was awarded the honorary doctor of letters degree by Brown University.

Her husband, a distinguished English and Renaissance scholar, taught at Duke University for thirty-six years. They had two sons: Everett Eddy, a chemist and investigative scientist; and Creighton Eddy, an international authority on art history and education.

Mrs. Gilbert died in Durham at the age of sixty-six. The Gilbert-Addoms dormitory on the East Campus of Duke University was named in honor of her and a contemporary.