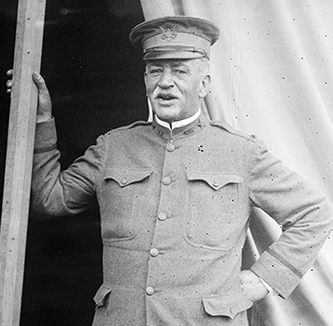 Edwin Forbis Glenn, major general, U.S. Army, was born in Greensboro, the son of Dr. Robert Washington Glenn, a surgeon during the Civil War, and Julia Gilmer Glenn. After attending Lenoir School for Boys in Caldwell County and Dr. Simmons Preparatory School at Sing Sing, N.Y., he received an appointment from North Carolina to the U.S. Military Academy, West Point, from which he was graduated in 1877. At the academy, his swarthy complexion won him the nickname of "Mohawk." He placed in the infantry, which thereafter became the center of his professional interests.

As second lieutenant in the Twenty-fifth Infantry, young Glenn served in Texas, Dakota, Minnesota, and Montana. In 1888, he was appointed professor of military science and tactics and assistant professor of mathematics at the University of Minnesota. While there, he studied law and received an LL.B. in 1890. Admitted to the bar in Minnesota, he took a leave of absence from the army to practice in St. Paul with the firm of Stephens, O'Brien, and Glenn. He became an authority on international law and later published Glenn's International Law (1895) and, under War Department orders, Rules of Land Warfare (1914).

Returning to the army, Glenn saw duty with the Minnesota National Guard and then was assigned as quartermaster and commissary officer at Fort Missoula, Mont. In the spring of 1894, he was detailed to the judge advocate general's department, serving in the Department of Dakota and later in the Department of Columbia at Vancouver Barracks. In early 1898, he was given command of an exploring and relief expedition to Alaska that ended the following November. He subsequently commanded another expedition to Cook's Inlet and other points in Alaska that was concluded in January 1900. These explorations were recognized by the National Geographic Society, of which he became a member. Moreover, the highway linking Anchorage and the Alcan was named the Glenn Highway.

Glenn's next assignment (he was then a captain) was as acting judge advocate, Department of the Visayas, in the Philippine Islands. On his promotion to major in 1901, he became judge advocate of the Fifth Brigade and was put in charge of the Military Information Division of the Philippines. In 1903, he returned to the United States where he served until July 1908, when he was sent again to the Philippines. Afterward he was assigned to the Twenty-third Infantry on the Mexican border and at Fort Benjamin Harrison, Ind.

In 1913, Glenn entered the War College as a student. At the same time he became president of the Infantry Association and in that capacity secured the same rate of pay for the officers of the infantry as for the mounted branches of the service. He was next detailed as chief of staff of the Eastern Department until July 1916, when he assumed command of the Eighteenth Infantry. He was serving with this regiment on the Mexican border when the United States entered World War I. From there he was sent to take charge of the First Officer's Training Camp at Fort Benjamin Harrison, Ind.

Promoted to the rank of brigadier general, Regular Army, in May 1917 and to major general, National Army, in August, Glenn was given the command of the Eighty-third Division at Camp Sherman, Chillicothe, Ohio. In June 1918, he took his division to France, where it was divided. Part of the division was used for training cadres at Le Mans, Sarthe, France. The establishment of this Replacement Depot, Training, and Embarcation Center was one of the outstanding achievements of Glenn's career. For this work, the French government made him a commander of the Legion of Honor. He commanded the Eighty-third Division until his return to the United States in June 1919 and reassignment to Camp Sherman, Ohio. After forty-six years of active service, he retired the following December at the age of sixty-two.

Glenn was a member of the Army-Navy clubs of New York and Washington, D.C. and of the Cosmos Club in Washington. He received honorary degrees from Union and Kenyon colleges, Ohio, and from DePauw and Vermont universities. Following retirement, he participated in the presidential campaign of General Leonard Wood and contributed to civic projects in his native state of North Carolina, including state drainage reclamation and the development of trade and commerce through a combined system of land and water transportation. While visiting a daughter in Mentor, Ohio, he became seriously ill and died two weeks later. He was buried in Arlington Cemetery.

Association of the Graduates of the U.S. Military Academy, 59th Annual Report (1928).

George W. Cullum, Biographical Register of the Officers and Graduates of the U.S. Military Academy at West Point (1920).