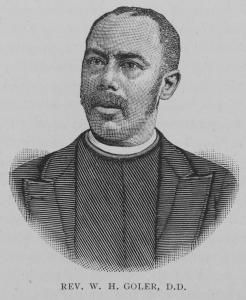 William Harvey Goler, educator, church leader, and president of Livingstone College, Salisbury, was born in Halifax, Nova Scotia. Although orphaned at an early age, he was able to attend the Halifax public schools. In 1861, he became an apprentice bricklayer and plasterer. His church activity and conversion occurred six years later. By 1870, Goler had emigrated to the United States and worked as a mason in Boston. With his savings, he entered Lincoln University, in 1872, where he met Joseph Charles Price, the founder of Livingstone College, and the Reverend E. Moore, a future instructor there. Goler was graduated as valedictorian in June 1878 and entered the seminary, where he earned a B.D. degree in 1881. He married Emma U. Unthank of Greensboro and made North Carolina his home for the next fifty-eight years.

Goler began his career at Livingstone College as a librarian but shortly afterward became a professor. In April 1891, he received an honorary doctor of divinity degree from Lincoln University. He was named president of Livingstone in 1894 and served until his retirement in 1917. In 1895, he delivered the featured address at the Anti-Slavery Society in Philadelphia. The A.M.E. Zion church, in which he held various pastoral appointments, benefited from his many activities and elected positions. After his retirement, Goler served as president emeritus of Livingstone College until his death.

Address of Dr. W.H. Goler, President of Livingston College, N.C. at the 120th Anniversary of the Pennsylvania Society for Promoting the Abolition of Slavery, the Relief of Free Negroes Unlawfully Held in Bondage and for Improving the Condition of the African Race. http://books.google.com/books/about/Address_of_Dr_W_H_Goler_President_of_Liv.html?id=fCGBmgEACAAJ&printsec=frontcover#v=onepage&q&f=false (accessed July 30, 2013).