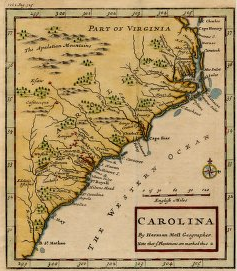 Thomas Cary (d. ca. 1718) is best known for the uprising (Cary’s Rebellion) that bears his name. As governor he knew how to adjust his sails in changing political winds. Cary was the son of Walter Cary and Ann Dobson and was born in Buckinghamshire, England. Cary’s mother later married governor and Lords Proprietor John Archdale. Cary became a successful merchant and shipowner in South Carolina. When Archdale became provisional governor, Cary served as provincial secretary and council member.

In 1705 Provisional Governor Nathaniel Johnson chose Cary to succeed Robert Daniel as the deputy governor. Upon arrival, Cary supported the Anglicans and required an oath of allegiance to hold public office as required by law. By enforcing the law, Cary kept the Quakers out of government, since their faith kept them from making an oath. In response, the dissenters and unhappy Anglicans sent John Porter to England in October 1706 get the Lords Proprietors to remove Cary.

In 1707 Cary served as representative to the South Carolina assembly where he became speaker of the house. While Cary was out of North Carolina, William Glover presided as acting deputy governor. Following the return of Porter, who obtained Cary’s ouster, in October 1707 Glover was elected as president of the council allowing him to continue as acting governor. Cary, who returned in November 1707, saw an opportunity to regain the governorship by seeking support from dissenters, the group he removed from public offices. He also built a support base with Bath County residents weary of Albemarle County’s dominance.

In October 1708, Cary and his supporters regained control of the government. Glover fled to Virginia claiming that Cary “threatened and avowed . . . to take away my life.” As acting governor, Cary voided laws enacted under Glover and replaced suspected disloyal officials with dissenters. He also lowered the quitrents for Bath County and reformed land grant policy to encourage immigration. Cary remained in power until early 1711 when he transferred power to Edward Hyde.

Cary left for Bath County but did not retire quietly. In March 1711, the assembly enacted laws aimed at dissenters and voided laws under Cary. Hyde sought the arrest of Cary. In May 1711 Hyde and around 150 men went after Cary and his followers in Bath County. Cary made his house into a fortress “with five pieces of Cannon” and about forty men. Hyde evidently tried to come to terms with Cary, but he was unsuccessful. Deciding against attacking a fortified position, Hyde retreated. Virginia Alexander Spotswood offered to mediate the dispute, but Cary refused. Cary decided to move against Hyde and overthrow the government. Cary with his supporters sailed for Thomas Pollock’s plantation where Hyde and about sixty supporters had established a fortress. Cary attacked Hyde’s position with cannon from the ship and tried to land his some of his men but the attack was repulsed. After a request from Hyde and the council, Governor Spotswood sent a British ship and marines to aid Hyde. With the arrival of the professional military, Cary and his chief lieutenants dispersed. Cary and five followers were captured in Virginia, and Governor Spotswood had them sent to London for trial in 1711. After a year, the men were released without any punishment, likely due to a lack of clear evidence. Cary returned to North Carolina in 1713 and spent his remaining years in Bath County. He was dead by July 1718.