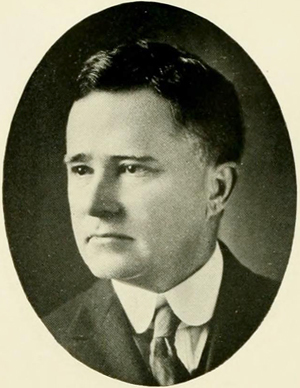 Edwin Almiron Greenlaw, Renaissance scholar and educator, was born in Flora, Ill., the first of seven children of Thomas Brewer and Emma Julia Leverich Greenlaw. His father was founder and president of Orchard City College, a normal training school at Flora; superintendent of public schools for Clay County; and founder of a newspaper, the Clay County Record which became the Southern Illinois Journal-Record. His grandfather, John Brewer Greenlaw, was a Methodist minister who married Sarah Wilder Lowell. Edwin Greenlaw was the great-grandson of William and Hannah Hersey Greenlaw and the great-great-grandson of William Greenlaw, a native of Edinburgh, Scotland, who with his father William, Sr., and five brothers, emigrated to Mount Desert Island, Maine, in 1765. They later moved to Saint Andrews, New Brunswick, where William married Catherine McNason.

Although Edwin Greenlaw had only three years of formal public school, he received an excellent education from his teacher-parents. At age twelve he entered Chester (Ill.) High School to become its top student and graduate at fourteen. After a year of postgraduate work there, he taught telegraphy, shorthand, literature, and business courses at Orchard City College until he was nineteen. He entered Illinois College in 1893, but left the next year to serve as president of Orchard City College for two years. In February 1896 he entered North-Western University, where he received an A.B. in history in 1897 and a master's degree in history—one of the first awarded by Northwestern—in 1898. In the latter year he was elected to Phi Beta Kappa. Greenlaw taught pedagogics and English at Northwestern and English and methods of teaching at Northwestern Academy from 1897 through 1905, taking a year's leave of absence in 1901 to begin work on a doctorate at Harvard. When he returned to Northwestern in 1902, Harvard awarded him an unsolicited M.A. in English. In 1903, he became head of the English department at Northwestern Academy and continued his doctoral studies at the University of Chicago. Harvard accepted that work and awarded him a Ph.D. in English in June 1904.

In 1905, Greenlaw became head of the English department at Adelphi College, Brooklyn, N.Y., where he published his first book, Selections From Chaucer, and continued to grow in reputation. From 1905 until the end of his life he labored to make Edmund Spenser's writing understood by the ages.

After twenty-one years of teaching, eight of them at Adelphi, he went to The University of North Carolina in the fall of 1913 at age thirty-nine. There he "did more for the (English) Department than any other person has done, and as much for the University as any other one person in this century." In June 1914, he was appointed chairman of the English department and began immediately to collect experts and specialists (expanding the faculty from eight in 1914 to thirty-seven in 1925) and to organize the department, which had classes and offices scattered throughout the campus. During the war years he instituted a vehicle, "The Range Finder," for the publication of student papers, which was a pioneer in a new type of college journalism. He also organized a graduate club. In 1915, he became managing editor of Studies in Philology (established in 1906), which he immediately put on a quarterly, subscription basis and expanded to include articles from leading scholars outside the university. Within three years it had tripled in size and was ranked among the leading journals in the field. In 1916, Greenlaw instituted a program for under-graduate honors in language and literature. In connection with this program (which included independent reading, tutorial assistance, a thesis, and an oral examination), he instituted a series of one-week "seminars" given annually by visiting professors, who chose their own topics and sent reading lists in advance.

In 1918, he persuaded Frederick Henry Koch to come to The University of North Carolina where the latter established the Carolina Playmakers. That year Greenlaw became one of the first five Kenan professors and in December he became the third dean of the Graduate School, which he then reorganized. Emphasizing research, he noted that the aim of a graduate school (unlike an undergraduate institution that exists to perpetuate knowledge) is to add to the body of knowledge through guiding student research. His department had 125 graduate students in 1920 and 310 in 1925. By 1921, Greenlaw was receiving the highest salary ever paid a professor in the history of the university.

Under the direction of a committee led by Greenlaw, a Department of Comparative Literature was established in 1920. Two years later—largely through his efforts in organizing the Graduate School—the university was elected to membership in the Association of American Universities. Also largely through his support, the University Press became a reality in March 1922. That year saw the publication of the first two volumes of his Literature and Life, a high school literature series that revolutionized the teaching of English in American high schools. The four volumes (volumes three and four were published in 1923 and 1924, respectively) sold over a million copies before his death. His governing philosophy that "great literature is the biography of the human spirit" was eloquently illustrated in this first major anthology of literature as the study of the history of ideas.

In 1925, Greenlaw accepted the first Sir William Osler Professorship of English Literature at Johns Hopkins University. There his scholarship attracted an increasing number of students and at his death the English department had grown from one of the smallest to one of the largest departments of university study. As a member of the academic council he played an important part in directing the work of the faculty of philosophy. His individual work included contributions to the study of medieval romance, Shakespeare, and Milton. Most importantly, his long application to Spenserian problems—beginning with an exhaustive elucidation of the poet's "Mother Hubberds Tale" in terms of the political, literary, and ecclesiastical environment at Elizabeth's court—found its fullest expression in the conception and planning of a variorum edition of the poet's work, the first two volumes of which were nearly ready for publication at the time of Greenlaw's death. Planning for the work of more than 4,000 pages began in 1922. He also founded the series of "Johns Hopkins Monographs in Literary History." His own contributions were two volumes, The Province of Literary History (1931) and Studies in Spenser's Historical Allegory (1932). The first of these was hailed by Dr. Marjorie Nicolson in later years as "one of the earliest important works in the establishment of what we now think of as the history of ideas."

Greenlaw's publications number in the hundreds; his books include: A Syllabus of English Literature (1912), Outline of the Literature of the English Renaissance (1916), and Builders of Democracy (1918). He edited Selections From Chaucer (1907), Irving's Knickerbocker History of New York (1909), Familiar Letters (1915), National Ideas in English and American Literature (1918), The Great Tradition (with J. Holly Hanford, 1918), and the four-volume anthology, Literature and Life (1922–24). Greenlaw was editor-in-chief of Modern Language Notes (1926–28), a member of the Tudor and Stuart Club, and president of the Johns Hopkins Philological Association (1929–30). The honorary degrees of LL.D. and D.Lit. were confirmed on him by The University of North Carolina (1926) and Northwestern University (1927), respectively. He was a member of the Modern Language Association, American Association of University Professors, English Association of Great Britain, American Dialect Society, National Council of Teachers of English, and the National Conference on English. He served on the advisory board of the Guggenheim Foundation from its inception in February 1925 until his death.

A deeply religious man who was active in the Methodist church and an accomplished musician (piano, clarinet, and voice), Greenlaw was married at Flora, Ill., 1 Sept. 1898, to Mary Elizabeth Durland, daughter of William Robert and Laura Eugenia Dye Durland. They had three children: Dorothy Durland, Margery Keith, and Mary Edwin. He died in Chapel Hill and was buried in the old Chapel Hill Cemetery.

Greenlaw had a fertile and stimulating mind, singularly free from dry pedantry. Although he argued eloquently for the "gospel of the infinitesimally small," his true interest lay always in the larger movements of human culture, and the province of philology was expanded by him to include not only the writings of literary merit but also every reflection of the intellectual life of the Renaissance. On 4 Oct. 1970, Edwin Greenlaw Hall was dedicated at The University of North Carolina in his honor. The university noted that "This Renaissance man with seemingly boundless energy and ambitious determination sacrificed his leisure to his study and the classroom and in his years at Chapel Hill raised himself to eminence among scholars of the English Renaissance and to primacy among students of Edmund Spenser. By means of truly great teaching he carried from the study to the classroom the riches of Shakespeare, Spenser, and Bacon." Thomas Wolfe, one of his students at Chapel Hill, wrote to him on 28 June 1930: "the men who waken us and light a fire in us when we are eighteen are so rare that their image is branded into our hearts forever, . . . we remember them always with affection and loyalty." Portraits of Greenlaw hang in the seminar room at Gilman Hall at Johns Hopkins University and in Greenlaw Hall at Chapel Hill.