Thomas Laurence Baker Gregory, portrait painter, was born in Hertford County. The name of his father is unknown, but his grandfather was very likely one Thomas Gregory who married Priscilla Baker, the sister of General Laurence Baker. His mother, Margaret Bradford, a native of Halifax County, was a descendant of the Reverend Thomas Burges. On the early death of her husband, she returned to Halifax where she married James Whitaker. Thomas L. B. Gregory was reared and resided all of his life in the Crowells Cross Roads section of Halifax County.

Nothing is known of his education and little about the artistic influences he encountered. He undoubtedly knew the work of the itinerant painter James McGibbon, who did several portraits in the town of Halifax about 1830. Young Gregory also may have been familiar with the fine portraits of his cousin, Mary Wynns Gregory, and her husband, Dr. Isaac Pipkin of Murfreesboro, which were painted by Thomas Sully in 1825. In the Scotland Neck neighborhood, near Gregory's home, lived the descendants of John Anthony, a native of Philadelphia, who owned a portrait of him painted by his first cousin, Gilbert Stuart. The work of Jacob Marling, the Raleigh portrait painter, was known in Halifax County in Gregory's formative years. 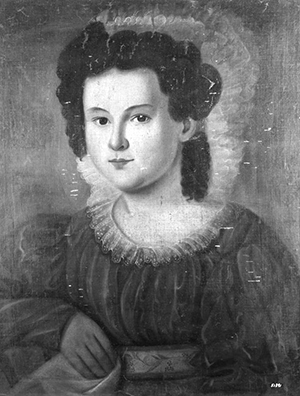 The first notice of Thomas Gregory as a portrait painter was in 1835 when he was twenty-eight. On 3 April of that year he advertised in the Tarboro Free Press that he would be available to do portraits in the local hotel of that town. From succeeding issues of the paper, it appears that he was so engaged in Tarboro for several months. There is no further record of him as an artist until November 1839, when John Buxton Williams of Warren County recorded in his diary that Gregory had come to do his portrait and that of his mother, Lucy Tunstall Williams. Williams also commented that Gregory had taken away an old portrait to copy. Thomas Gregory did not sign his work. Using the portraits of John Williams and his mother as a standard of comparison, it can be established that he painted two other portraits in the Williams family connection about the same time. Although he must have done several paintings when he was working in Tarboro in the spring of 1835, no portraits by him have been found there with the possible exception of the portrait of Jonas Johnston Carr of the Old Sparta section of Edgecombe. This is of interest as Carr and John B. Williams married sisters, and Gregory would thus have been provided with an entrée to the Warren County family. No paintings by Thomas Gregory have been identified in his home neighborhood in Halifax.

As a painter, Gregory was only average. He was able to capture a likeness but other details in his pictures are clumsy. Of the portraits attributed to him, the one of John B. Williams is by far the best. Gregory's chief importance lies in the fact that he was one of the early natives of the state to attempt portrait painting as a profession.

Little is known of the last two decades of the painter's life. References to him in the deeds of Halifax County reflect mounting economic difficulties. At one point, his wife sued him for the return of property guaranteed to her in a prenuptial agreement. Thomas Gregory appears in the 1850 census as a farmer in the Crowells neighborhood. In the 1859 death schedule for the census of 1860, he is listed as an artist and as having died of consumption of several months' duration.

In 1828 Gregory married Mary Frances Pittman of Halifax County. Of their several children, only one, Frederick William, married and left descendants. Thomas L. B. Gregory, his wife, and several children were buried under a handsome monument in Old Trinity Episcopal Cemetery, Scotland Neck. Photographs of his known portraits are on file in the Frick Art Reference Library, New York. They also appear, though not attributed to him, in a book of portraits and photographs published in 1961 by the Alston-Williams family society.

Edward Biddle and Mantle Fielding, The Life and Works of Thomas Sully (1970).

John Buxton Williams diary (in possession of a descendant).