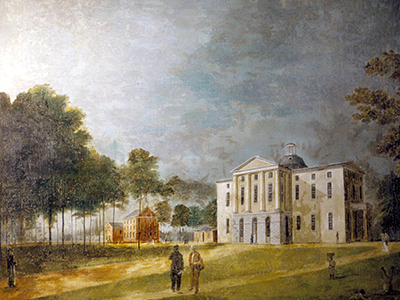 Jacob Marling, painter, decorator, and teacher, lived in Warrenton, where he taught at the academy and executed scenes for the Thespian Society at the Warrenton Theatre. Taking up residence in Raleigh, he became director of the North Carolina Museum in 1813, the year of its founding. The North Carolina Museum, which was a general museum, had a reading room where most of the principal newspapers, reviews of literary works, and so forth, were filed, as well as natural and artificial curios, sketches, maps, drawings and paintings, rare coins, and books. Jacob Marling may well be called North Carolina's first serious collector of works of art: at his death, his entire collection, containing fine oil paintings and prints, was put up for sale, and his collection of natural artifacts was transferred to The University of North Carolina in Chapel Hill.

About 1825 Marling did his best known painting, that of the North Carolina statehouse after its restoration. In the landscape he also shows a small fireproof building, erected by Edmund Lane in 1819, as a one-story house; its door is evidently located a few feet north of the present bronze statue of George Washington just south of the Fayetteville Street entrance to the statehouse.

Although Marling's oil paintings are not signed, his works can be easily identified through stylistic means. The crispness of his line and color is his trademark. He seldom used the brownish tones usually associated with his period of art. His portraits of men and women, his landscapes, and his miniatures (usually watercolor on paper) all have a uniqueness that is easily identifiable. More and more of his works are being found in local collections, and they all attest to the genius of the artist. His portraits of statesmen and other well-known early nineteenth-century persons form a valuable historical document of the time. The portrait listing includes John Gray Blount, William A. Blount, James Clark, William Donnell Cobb, Joseph John Daniel, John Robert Donnell, Edward Graham, Dr. Fabius Julius Haywood, the Reverend William McPheeters, William Miller, John Owen, Thomas Gilchrist Polk, John Mushro Roberts, and Montford Stokes. Many other portraits listed in the inventory of his estate have not been located.

Louisa Marling survived her husband by thirty years. In her later life she ran a millinery business in Raleigh, and it is recorded that she provided lamp shades for the new statehouse in the 1850s.