Lillian Baker Griggs, librarian, was born in Anderson, S.C., the daughter of William F. and Cora Wilhite Baker. From 1892 to 1895 she attended Agnes Scott College. She married Dr. Alfred Flo 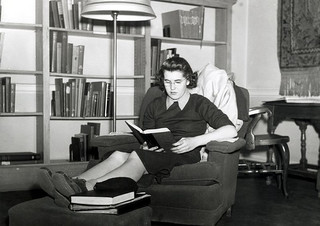 urnoy Griggs on 21 Apr. 1897, and they had one son, Alfred, Jr. After her husband's death in 1908, Mrs. Griggs enrolled in the library school of the Carnegie Library in Atlanta (later affiliated with Emory University) and received a certificate in librarianship in the spring of 1911.

Mrs. Griggs, a pioneer professionally trained public librarian, began work as librarian of the Durham Public Library on 1 July 1911. Not satisfied with just organizing the library and serving the people of Durham, she persuaded the county commissioners to fund the service to rural residents that she already had been providing informally; thus, Durham became the first North Carolina town to have a contract for library service to the rural area. Her innovations also included organizing a branch library in the mill district, developing a high school library, helping to start a library for the Negroes of Durham, and circulating small collections in the county schools.

Active in numerous professional organizations, Mrs. Griggs served as chairman of the public library section (1913), treasurer (1913–16), and president (1917–18, 1933–34) of the North Carolina Library Association. Through her work on the council of the American Library Association and its committees and as president of the League of Library Commissions (1929–30), she also contributed to national library organizations. In 1918, she took a leave of absence from the Durham library to join the War Service Activities of the American Library Association, serving first on the Gulf Coast and in 1919 with the army of occupation in Coblenz, Germany. Before her war service Mrs. Griggs had obtained Carnegie funds to build a new building for the Durham library. After its completion in 1921, she renewed her push for better rural service by persuading the Kiwanis Club to provide money for a bookmobile, the first in North Carolina.

As director of the North Carolina Library Commission in Raleigh from 1924 to 1930, Mrs. Griggs worked vigorously to extend county libraries throughout the state. She prepared the groundwork for the Citizen's Library Movement in North Carolina, which began at the 1927 North Carolina Library Association conference and was promoted by Frank Porter Graham and Louis Round Wilson. Through her work on the Rosenwald Advisory Committee Mrs. Griggs had an even wider influence on the planning for library development in the South.

In 1930, when she accepted the position of librarian of the newly created Woman's College of Duke University, Mrs. Griggs turned from a public to an academic library career. In addition to building an excellent undergraduate collection for the use of the women at Duke, she developed the students' interests in extracurricular reading and the arts through a unique browsing room and art exhibitions in the library. While at Duke Mrs. Griggs continued to be active in a broader sphere, serving on a committee with Susan Grey Akers to plan library science curricula in the consolidated University of North Carolina, working with Robert Downs on a state planning committee for libraries, and contributing through activities in the North Carolina Library Association and as president of the Southeastern Library Association in 1933–34. Mrs. Griggs retired from Duke in 1949 and died six years later.