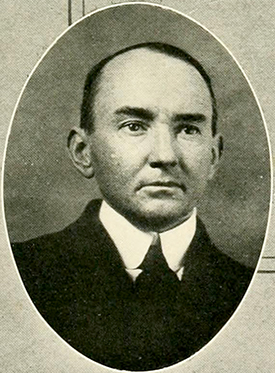 Louis Round Wilson, librarian and educator, was born in Lenoir, the sixth and last child of Jethro Reuben and Louisa Jane Round Wilson. Both of his parents were teachers, and though they could not afford to keep their children in school on a regular basis, they were anxious for them to secure an excellent education. Louis attended local Lenoir schools and academies when the family finances did not require him to work. From 1891 to 1894 he was a typesetter and printer's devil in the office of the Lenoir Topic. In 1894 he attended Davenport College in Lenoir, and in 1895 he entered Haverford College, in Haverford, Pa., where he was employed as an assistant in the library. Wilson transferred to The University of North Carolina in the fall of 1898 and was graduated in May 1899.

Wilson's parents expected him to become a teacher, and in August 1899 he began teaching at Vine Hill Male Academy in Scotland Neck. After a year he moved to Catawba College, in Newton, where he taught Latin and English. In 1901 he accepted a position as librarian at The University of North Carolina and returned to Chapel Hill. There he also resumed his studies, receiving a master's degree in English in 1902. In 1905 he was awarded the Ph.D. degree in English and was elected to Phi Beta Kappa. From 1905 to 1907 he was an assistant in German at the university.

During his early years at Chapel Hill Wilson developed an interest in librarianship as a profession, and when in 1906 he had to decide whether to stay on at the university as librarian or seek employment elsewhere as a professor of English, he elected to stay in Chapel Hill. By the time he made this decision he was already well embarked on his career. In his first decade in the position he developed a library collection that would support graduate study and research. Recognizing the university's unique position in the state and region he repeatedly sought funds to obtain material that would reflect the history of North Carolina and the South. Later he obtained funds from university friends and alumni to develop a collection of rare books and incunabula in the library.

Also in the early years Wilson was absorbed in planning and supervising the building of the new Carnegie library, which opened in 1907. The building remained the main university library until 1929, when it was replaced by a larger structure that Wilson also planned. The new building was named for Wilson in 1956.

While building the library collection and supervising the construction of the new library, he began developing a trained staff of librarians. Wilson started teaching courses in librarianship in the summer school of the university in 1904. In 1907 he joined the faculty as an assistant professor of library science, and in 1920 he was appointed a Kenan Professor of Library Science.

A prolific writer, he contributed articles on every facet of his profession to library and education journals. One of his concerns, on which he expounded in local North Carolina newspapers in 1921, was in the phenomenon of reading. He viewed reading not only as an element in education but also as concomitant with the good life. Curious about ways to measure its use and test its effectiveness, he became interested in the research techniques of social scientists and in the use of those techniques to test the validity of some of his intuitive feelings about the value of books and reading. He was fortunate that The University of North Carolina was an early center for the development of the social sciences, for he was able to turn to his faculty colleagues for help in formulating devices to measure the extent and effectiveness of reading in the state and region. Wilson later expanded his interest in reading to include the entire United States and in 1934 published The Geography of Reading.

While pursing his career as university librarian and lending his time and talents to the burgeoning profession of librarianship, Wilson was also a creative and energetic member of the Chapel Hill faculty. An early advocate of the concept of university extension service to the state, he was appointed to the Committee on Extension in 1911 and served as chairman from 1912 to 1920. He envisioned the Alumni Association as another avenue to North Carolinians, and in 1912 he founded the Alumni Review, which he edited until 1924. From 1914 to 1932 he sat on the editorial board of The University News Letter, and in 1922 he was appointed director of the newly created University Press, a position he held until 1932. Wilson was a devoted friend and admirer of Edward Kidder Graham, president of the university from 1914 until 1918, and following Graham's death in 1918 he was made chairman of the Graham Memorial Building Committee. In the 1920s while planning and supervising the building of the new library and the Graham Memorial, he was also a member of the building committee of the University Methodist Church in Chapel Hill.

During these years Wilson was a respected member of the university faculty, as well as an admired citizen of the town of Chapel Hill. A witty man with a keen mind, he had many friends among his colleagues and the towns-people. He was an avid tennis player until he developed tuberculosis in 1916. Wilson went to Saranac Lake, N.Y., for treatment, and when he returned to Chapel Hill, he gave up tennis in favor of walking and gardening, hobbies that he continued will into his nineties.

Following the dedication of the new library in 1929, Wilson took a leave of absence from the university and made the first of three trips to Europe. Returning to Chapel Hill in the summer of 1930, he turned his attention to securing funds for a library school at the university. The Carnegie Corporation, whose president, Frederick P. Keppel, was an admirer of Wilson, awarded the university a grant of $100,000. The School of Library Science opened in 1931 with Wilson as its first dean.

Wilson's career had not gone unnoticed outside North Carolina. His sense of mission and service to the people of the state, his dedication to the concept of education for librarianship, his interest in formalizing the profession through professional associations and the development of a body of literature, and his curiosity about the use of social science techniques in librarianship made him the obvious candidate for the deanship of the Graduate Library School of the University of Chicago. He was offered and declined the position in 1926. In 1932, when offered the post again, he accepted it.

In his ten years at the Graduate Library School, Wilson rounded out and expanded every aspect of his varied interests in the profession. He assembled a faculty that developed a graduate curriculum designed to produce administrators for every type of library. At the same time, the faculty was engaging in research that sought solutions to some of the problems confronting librarians. Wilson taught courses in university library administration and library trends. The studies and papers produced at the Graduate Library School during Wilson's term as dean were published as part of the University of Chicago Studies in Library Science, of which he was general editor.

At Chicago Wilson continued to serve as a library consultant and surveyor, an activity he had begun in 1928 when he surveyed the library of the Union Theological Seminary in Richmond, Va. From 1928 until he retired as a consultant in 1955, Wilson surveyed many college and university libraries, as well as serving as a consultant to the Tennessee Valley Authority, Tennessee Valley Library Council, General Education Board, and American Library Association Board of Education for Librarianship. 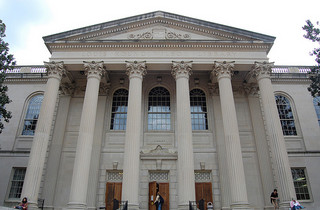 He left the University of Chicago in 1942 and returned to Chapel Hill, where he rejoined the faculty of the School of Library Science. He taught courses in university library administration intermittently until 1959, when he retired from the faculty at age eighty-three. Also assuming many committee responsibilities, he was director of the university's Sesquicentennial Celebration in 1944–46 and edited the thirteen volumes that marked that event. He served on the board of the University Press and the Institute for Research in Social Science. In 1951 he was appointed special assistant for development to the chancellor of the university, and in 1959, following his retirement from the faculty, he became special assistant to the president of The University of North Carolina system. He retired from that post in 1969.

Wilson continued to write after he returned from Chicago. The University Library, written in collaboration with Maurice F. Tauber and published in 1945, was considered the authoritative work on the subject for many years. Wilson also produced a two-volume history of The University of North Carolina and wrote a series of articles about major events that reflected the influence of the university in the life of the state. These articles were compiled into a volume, Louis Round Wilson's Historical Sketches, which was published in October 1976, a few months before his one-hundredth birthday.

Throughout his life in Chapel Hill Wilson was a member of the University Methodist Church. He was a deeply religious man whose service to the church included many years on the Board of Stewards. An early and outspoken proponent of racial justice and equality, he wrote to newspapers frequently on the subject. He also maintained a lively correspondence with the North Carolina congressional delegation, encouraging its support of civil rights legislation. Wilson's political preference was for the Democratic party.

In 1909 he married Penelope Bryan Wright of Coharie. They had four children: Elizabeth, Louis, Jr. (d. 1913), Penelope, and Mary Louise (Mrs. Dean Stockett Edmonds, Jr.; d. 1978). He died a few days before his 103d birthday and was buried in the Old Chapel Hill Cemetery. A portrait of him hangs in the Wilson Library of The University of North Carolina.

Edward G. Holley, "The Centenary of a Giant of Librarianship: Louis Round Wilson," The ALA Yearbook (1976).

Louis Round Wilson Bibliography: A Chronological List of Works and Editorial Activities (1976).