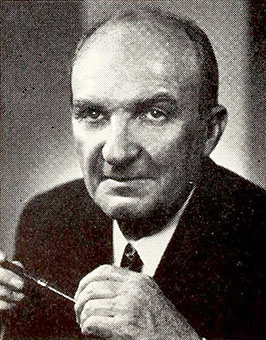 James Gordon Hanes, Sr., manufacturer and civic leader, was born in Salem, one of six sons of John Wesley and Anna Hodgin Hanes, and grandson of the first P. H. Hanes who moved to Salem in 1880 and founded one of the large tobacco factories later absorbed by the R. J. Reynolds Tobacco Company. After attending the local public schools, he entered The University of North Carolina and was graduated in 1909 with the B.A. degree.

Returning to Salem, Hanes immediately joined the staff of the local Shamrock Mills, a manufacturer of men's hosiery owned by his father. He found the company debt-ridden, but within five years—through his skillful management—the firm had become solvent and was renamed the Hanes Hosiery Mills. He was elected president of the company in 1917 and chairman of the board of directors in 1938, a post he held with pronounced success and expansive growth until his retirement. By then, Hanes was recognized as the "world's largest producer of women's seamless nylon hoisery." He lived to see his son, J. Gordon Hanes, Jr., succeed him in the long line of offices until he too became chairman of the board of the Hanes Corporation.

Known for his business acumen, Hanes was long regarded as one of the most astute men in Winston-Salem, a city of financial giants. He served on the board of directors of many corporations, including the Norfolk and Western Railway Company, the Savoy Plaza Hotel in New York City, the Wachovia Bank and Trust Company, and the Hanes Dye and Finishing Company. Although he held offices in many organizations directly connected with his business, one of his greatest prides, and one to which he gave conspicuous leadership, was as a director of the National Association of Manufacturers.

Hanes had a special interest in local government, and believed every businessman should make community service a part of his life. With that philosophy he was elected to the Board of Aldermen of Winston-Salem and then became mayor for four years (1921–25). In 1928, he was elected to the Board of County Commissioners of Forsyth County, serving until 1950; for more than half of those twenty-two years he was chairman of the board.

As both a businessman and a government official, Hanes was an outspoken and effective advocate of a kind of conservatism that demanded economical operation. When times were good, he encouraged expansion of the city. While he was mayor, Waughtown, West Highlands, and Buena Vista were annexed; and five public schools, three fire stations, and four public buildings were erected. When times were bad, he led the county in reducing its tax rate by 16 percent, reduced the bonded indebtedness of the county by 50 percent, and "foisted off on the city government a number of services that counties ordinarily pay for." One editorial writer claimed that "probably more than anything else, his conservatism in county government established the long-standing division between City and County governments." To avoid a surplus of hospital beds in metropolitan Winston-Salem, Hanes proposed building a new community hospital on Cloverdale Hill and forming an expanding medical center built around the Baptist Hospital and Bowman Gray School of Medicine. This effort was aborted, but two new community hospitals were built on the outer fringes of the city during the 1960s.

One of Hanes's greatest contributions to Winston-Salem was made in the mid-1950s when he "spearheaded an effort to get the city's key leaders behind the [city] school board as it moved toward desegregation policies." From that effort came the excellent Winston-Salem Community Relations Project, in which Hanes was the central figure. Through the project, black and white leaders were brought together to work for harmonious race relations.

Hanes also served on numerous boards of local and state significance. For many years he was a trustee of Greensboro College. A study he headed to test the intelligence of urban children led to the establishment of the Human Betterment League of North Carolina, of which he served as perennial treasurer. For his multiple services to social projects, he received the North Carolina Conference for Social Service award in 1965 as a "leader, benefactor and servant of the people" of the state.

Loyal to his alma mater, Hanes found many ways—tangible and intelligible—to provide assistance. In 1960, he gave The University of North Carolina library a cash gift of $8,000 to finance the publication of a catalogue, Incunabula in the Hanes Collection, of the library. In 1961, he established the endowment necessary to fund the James Gordon Hanes Professorship in the Humanities.

The city of Winston-Salem named its community center in appreciation of James Gordon Hanes, who survived to see it as the hub of civic work, utilized by craftsmen, artists, volunteers, businessmen, and social servants. The very nature and use of the building epitomizes his constructive life in Winston-Salem and Forsyth County.

On 12 Nov. 1911 Hanes married Emmie Dewry; they had one son, James Gordon Hanes, Jr. Mrs. Hanes died in 1916. On 1 Apr. 1924, he married Molly Ruffin, who died in 1957. Hanes remained in unusually good health until his death in Colorado Springs, Colo., where he had gone two days before on a business trip. Funeral services were held at the Centenary United Methodist Church, Winston-Salem, with interment in Old Salem Cemetery.