Hunter Lee Harris, geologist and poet, was born at Sassafras Fork (Stem) in Granville County, son of Adam Clarke and 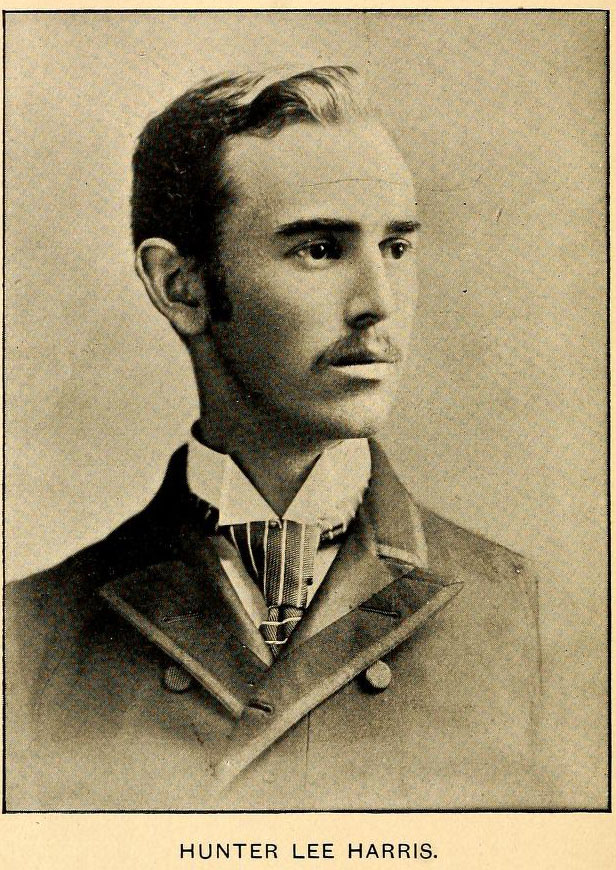 Martha Hunter Harris and the youngest of six. He had two sisters and three brothers. The families of both parents were prominent in the business and social affairs of Granville, Vance, Halifax, and Edgecombe counties. His father was a physician, farmer, and local Methodist preacher. Educated at home and at a neighborhood school, Harris grew fond of reading, especially Dickens. He wrote that he found more pleasure in the company of domestic animals than of boys his own age. In 1885 one of his brothers and he went on a tramping tour of the North Carolina mountains as mineral surveyors.

After several years of keeping books for a merchant, Harris entered The University of North Carolina in January 1886. At Chapel Hill he specialized in chemistry and geology, sang in the Glee Club, was editor of the University Magazine, and in his senior year was class poet and president of the YMCA. In 1889 he was named an "honor graduate" with a B.S. degree. Somewhat later he became secretary of the North Carolina Experiment Station in Raleigh, returning to the university in 1891–92 as instructor in geology. The following year he took advanced courses in geology and geography at Harvard on a university scholarship and received a second B.S.; his thesis was entitled "History of the Atlantic Shore Line."

For three years beginning in 1891, Harris was assistant geologist for the North Carolina Geological Survey. At a field camp in Harnett County near Spout Springs on the lower Little River, he was drowned while swimming. He was buried in the family cemetery in Vance County.

During his college days, Harris drafted a "Map of Chapel Hill and Vicinity." His poems appeared in the University Magazine and the Detroit Free Press. In 1890, he printed Twilight Songs and Other Youthful Poems as a Christmas souvenir for his friends. Along with thirteen poems, it contained a photograph portrait as its frontis-piece and some of his drawings. In 1903 the university first presented the annual Hunter Lee Harris Memorial, a gold medal awarded for the best short story by a student.