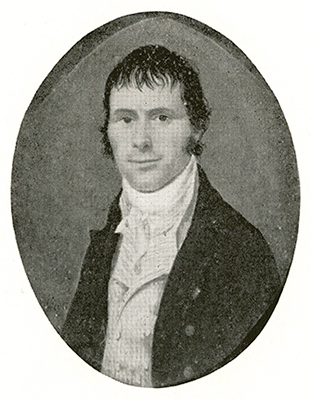 Sherwood Haywood, banker, was born in Edgecombe County, the son of William and Charity Hare Haywood. He first entered public life as clerk of the state senate, a position to which he was elected on 4 Jan. 1786, following the resignation of his brother, John Haywood, to accept the post of state treasurer. He continued to serve as clerk of the senate until 24 Dec. 1798. Early in 1800, he moved from Edgecombe County to Raleigh, where he purchased four lots from John Haywood which comprised the block bounded by Wilmington, Edenton, Blount, and Jones streets. In 1804, when the Bank of Newbern was chartered by the state, Sherwood Haywood became Raleigh agent of the bank, a position that he held until his death.

Haywood was one of the original trustees of the Raleigh Academy, serving for the rest of his life. He also subscribed to the fund to complete the Main (South) Building at The University of North Carolina. Calvin Jones described him as a "good, polite, clever, worthy man, who never contradicted anyone in his life." He married Eleanor Hawkins, by whom he had nine children; one son was Richard Bennehan Haywood, who became a physician and surgeon in Raleigh. Haywood and his wife were buried in City Cemetery, Raleigh, in the Colonel William Polk plot.