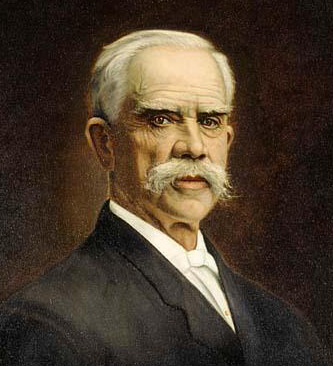 Ashley Horne, businessman and farmer, was born at the family estate near Clayton, one of the nine children of Benajah and Elizabeth Tarboro Horne. His father was of Scottish descent and served the area as magistrate while prospering in farming and business enterprises.

Young Horne had only about two years of schooling, mostly under William B. Jones, a noted educator of the area. Early on, however, he showed a predilection for trading. Unknown to his father, he would with no money buy cattle in Clayton on his father's credit, drive them to Raleigh to sell, and, on returning to Clayton to settle his accounts, usually realize at least a small profit.

In 1861, he enlisted in the Confederate Army as a private and was assigned to the Fiftieth North Carolina Regiment. Later he was assigned to the Fifty-third Regiment, the same group in which his brother Sam was a lieutenant, and served mostly with General Robert E. Lee and the Army of Northern Virginia. He participated in the evacuation of Richmond and the charge at Hare's Hill. As an orderly sergeant, he led nine men to carry the news of the surrender to Johnston's army at Greensboro and Sherman's army at Durham.

The first of his six brothers to return home after the war, Horne found some of Sherman's troops still occupying the plantation. When they left a month later, they took all the stock, produce, and fencing. Using two horses he had stolen by sneaking into Sherman's camp in Raleigh one night, Horne began to replant and rebuild. Around this time, he started accumulating small amounts of capital by trading in wood and tobacco. Dividing his time between farming and business, he became one of the state's most prosperous citizens by the turn of the century. As a farmer, he was president of the North Carolina Agricultural Society and published "cotton letters" with growing advice to other planters. His business prowess earned him the presidencies of many concerns, among them the Clayton Banking Company in 1899, the Clayton Cotton Mill in 1900, and the Capudine Chemical Company in 1904. He was vice-president and director of the Caraleigh Phosphate and Fertilizer Mills and a director of many industries including the Raleigh Standard Oil Mill, Raleigh Commercial and Farmer's Bank, Caraleigh Cotton Mill Company, and Wilson Farmer's Oil Mill. He was one of the first in the state to advocate the formation of insurance companies in North Carolina to keep insurance money within the state and served as director of the Eastern Life Insurance Company and the Goldsboro and Seven Springs Securities Company.

A lifelong Democrat, Horne served one term in the state senate (1884–85) and was a member of the finance committee that established what would become North Carolina State College. He also protested the use of free prison labor in state railroad construction. He was unsuccessful in his one bid for statewide office when he ran for the Democratic gubernatorial nomination in 1908. While in the senate, Horne worked to secure funding for a monument to the North Carolina Women of the Confederacy. Failing to win legislative approval, he donated $10,000 of his own money and commissioned the sculpture that stands in Raleigh.

Horne was married twice, first in 1871 to Cornelia Frances Lee by whom he had three children and later to Rena Hasseltine Beckwith by whom he had one child. Horne Memorial Methodist Church, Clayton, which he helped establish, was named to honor his service to the church.