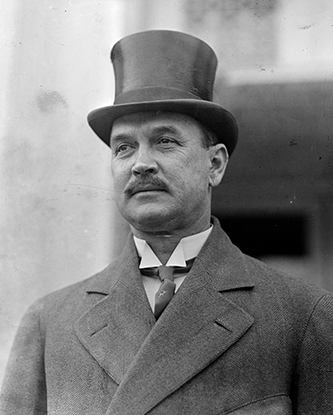 David Franklin ("Frank") Houston, educator, author, U.S. cabinet official, and business executive, was born in Monroe, Union County, the youngest child of William Henry and Cornelia Anne Stevens Houston. His father farmed in North Carolina, then moved to Darlington, S.C., in 1872, where he became a horse and mule dealer, and for a time the operator of a general store where young Houston was employed. Although his father barely made the family a living, Frank early demonstrated his energy, ability, and ambition by graduating from the College of South Carolina in 1887. After a year of graduate study and three years as superintendent of public schools in Spartanburg, S.C., he studied political science and economics at Harvard under President Charles W. Eliot, receiving the M.A. degree in 1892.

With that background and the strong support of his famous mentor, Houston rose rapidly in the academic world. While teaching political science at the University of Texas, he married Helen Beall, of Austin, in 1885; published the scholarly A Critical Study of Nullification in South Carolina (1896); and served as dean of the faculty for three years. In Austin he also acquired as friends a number of powerful people, including Colonel Edward M. House, who later was chiefly responsible for Houston's appointment as a federal administrator.

In 1902 Houston began a distinguished career in college administration when he was chosen president of Texas A&M College. Three years later he returned to Austin as president of the University of Texas, and in 1908 he became chancellor at Washington University in St. Louis. Within a few years he had gained a national reputation for effective administrative leadership.

Colonel House brought Chancellor Houston to the attention of Woodrow Wilson, who named him secretary of agriculture in 1913. An economic conservative, Houston at first opposed increased federal intervention to aid agriculture such as supporting cotton prices or providing agricultural credits. But he later acquiesced in such measures and even supported federal aid to agricultural education, the building of hard-surfaced roads, and federal licensing of agricultural warehouses. Houston proved to be a model administrator, reorganizing the administrative structure of his department and staying out of matters that did not concern him. His most important legacy as agricultural secretary, however, was to change the department's emphasis from trying to improve production, to improving marketing, prices, and distribution. He led the effort to establish a cooperative Extension Service, an Office of Markets, and an Office of Information, while recruiting many of the country's best-known agricultural economists to work for the Department of Agriculture. Although he apparently did not often attempt to influence policy in other areas, his memoirs, Eight Years with Wilson's Cabinet, 1913 to 1920 (2 vols., 1926), remain a good source for intimate discussions of Wilson's administration.

From February 1920 to March 1921, Houston served as secretary of the Treasury. As an ex officio member, he was also elected chairman of the Federal Reserve Board. His integrity and economic conservatism led him to adopt stringent policies to halt the inflationary economic boom under way. Although his monetary policies probably had little to do with the depression and the collapse of farm prices that followed in 1920, Houston received much of the blame.

A man who never sought publicity, Houston spent the last two decades of his life in relative obscurity. He shunned a political career, even though mentioned as a possible Democratic candidate for the presidency in 1924. However, he remained extremely active in business and education. From 1921 to 1927 he was associated with AT&T as president of Bell Telephone Securities Company and as financial vice-president of American Telephone & Telegraph Company, and from 1927 to 1940 he was president of Mutual Life Insurance Company of New York. He also served as a member of the Board of Overseers of Harvard and as a trustee of Columbia University.

Check his birth year, at the

Check his birth year, at the top. He may have been a prodigy, but he did not get started in 1886.

Thanks for pointing this

Thanks for pointing this discrepancy out. Sometimes the authors from the Dictionary of North Carolina Biography made mistakes like this. I will send to NCpedia staff to look into making a correction.