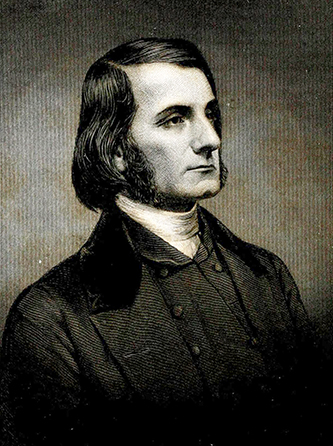 Fordyce Mitchell Hubbard, Episcopal clergyman and educator, was born in Cummington, Mass., the son of Roswell and Sarah Mitchell Hubbard. In 1829 he was graduated from Williams College, in Massachusetts, where he remained for several years as a tutor. He studied law and for a time was associated with the Round Hill School in Northampton. Later he taught Latin at a classical school in Boston and in 1836 published an edition of Poems of Catullus for the use of the school. While residing in Boston he married Martha Henshaw Bates, the daughter of a U.S. senator from Massachusetts.

In November 1842, having been ordained an Episcopal priest, Hubbard became rector of Christ Church in New Bern, N.C. He remained there until 1847, when he was appointed principal of Trinity School near Raleigh. A year later he was elected to the chair of Latin Languages and Literature at The University of North Carolina, a position he held through 1868. While in Chapel Hill, he served as rector of the Chapel of the Cross in 1852 and again in 1868.

In 1848 his life of William R. Davie was published as a volume in Jared Sparks's Library of American Biography. Hubbard also revised the North Carolina Reader by Calvin H. Wiley; his editions of Reader No. I appeared in 1855 and 1856 and of No. II in 1856, 1857, 1858, 1859, and 1873. In addition, Hubbard contributed to the University of North Carolina Magazine, the North Carolina Journal of Education, the Southern Literary Messenger, and the North American Review. In 1860 he received an honorary D.D. degree from Columbia College in New York and Trinity College in Connecticut.

Hubbard left The University of North Carolina in 1869 to become principal of St. John's School in Manlius, N.Y., and to serve as rector of Christ Church there. He retired to Raleigh in 1881, but remained active in the Episcopal Diocese of North Carolina until his death. His wife and his only child, a daughter, both predeceased him in 1870.

Journal of the Convention of the Diocese of North Carolina (1842–88).