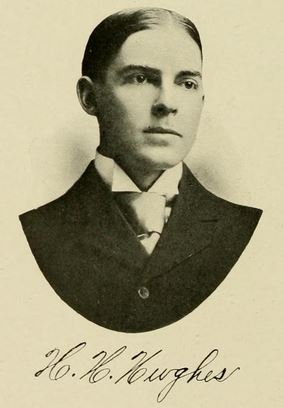 Hughes attended local schools and during vacations visited his mountain kinfolk, unconsciously absorbing their highland dialect. After high school in Grover, he worked off and on to earn money for college expenses, including writing for the newspapers. In 1901 he entered The University of North Carolina, then took a job in Yorkville, S.C., for two years between his sophomore and junior years. By the time Hughes received the A.B. degree in 1907, he had become prominent in the university literary clubs, was a major contributor to the campus publications, was editor of the annual, and had been elected to Golden Fleece, the student leadership society. While a senior he was an instructor in English, continuing in the post until he was awarded the M.A. degree in 1909. His interest in theater was stimulated by courses in modern drama under Professor James F. Royster. He went to Columbia University to pursue a doctorate, but abandoned his plans upon being appointed lecturer in English at Columbia, where he instituted a course in practical playwriting and organized the Morningside Players. During World War I, Hughes was a captain in the army—much of the time as a member of the American Expeditionary Force in France.

Back at Columbia, his classes were enthusiastically attended by New York theater people as well as students. Often he was called to Broadway as a "play doctor." Hughes was active in theater affairs, at one time serving as chairman of the National Council on Freedom from Censorship. His first play, A Marriage Made in Heaven, was written about 1918 but not produced until ten years later. Wake Up, Jonathan (1921), a collaboration with Elmer Rice, became a successful vehicle for the famous actress Minnie Maddern Fiske. Hughes was awarded the Pulitzer Prize in 1924 for Hell-Bent fer Heaven when the Pulitzer Committee at Columbia reversed the jury's selection of George Kelly's The Show-Off. The prize play was based on fresh observations he had made during a visit to the North Carolina mountains in 1921. The melodramatic account of a fanatic mountain preacher, it came at a time when the new realism was permeating the American theater. Ruint (1925), his second "folk play," is a comedy in which the North Carolina mountain people take revenge on a northern visitor believed to have "ruint" a local girl. Everything is straightened out when it is revealed that he had only kissed her. These two plays were more successful than three satiric comedies that followed: Honeymooning on High: A Silly Play for Silly People (Boston, 1927); It's a Grand Life (1930), a collaboration with Alan Williams; and The Lord Blesses the Bishop (1934).

In 1930 Hughes married the American actress Janet Cool Ranney, and they had a daughter, Mrs. Ann Ranney Moss, of Missoula, Mont., born in 1935. Hughes loved animals and the country life; on his farm at West Cornwall, Conn., he said he had rather be a farmer than a college professor. He died at his home in New York after becoming ill while attending the rehearsal of a play at Columbia.