by Charles B. Lowry, 1988; Revised by Jared Dease, Government and Heritage Library, December 2022 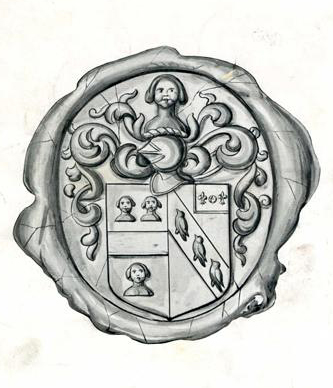 Frederick Jones, merchant, lawyer, and planter, was a member of that class of Virginians called by Carl Bridenbaugh "First Families of the Chesapeake," families often founded by sea captains such as Jones's father. Roger Jones (1625[?]–1701) of Nottinghamshire served as a captain in the British Navy in Ireland and the West Indies during and after the Interregnum, and became involved in mercantile activities and land acquisition which made him wealthy. He and his first wife, Dorothy Walker, daughter of Sir John Walker of Mansfield, Nottinghamshire, accompanied Lord Thomas Culpepper, with whom Captain Jones was associated, to Virginia. They resided at Green Springs (1680–85) with the governor while Jones built landholdings, made commercial contacts, and coasted for pirates under Culpepper's commission.

Frederick was born in England, whereas his younger brother, Thomas (169?–1758), may have been born in Virginia. Merchant activities typically based on consanguinity drew young Frederick into the affairs of the firm of his father and Julius Deeds, "Merchants of London," and made him a part of that circulating elite that moved easily between North Carolina and Virginia during the Proprietary period. Jones's first wife, Jane Harding, died in 1719, and he married Sarah, daughter of Major Samuel Swann, Sr., and granddaughter of Alexander Lillington, both Carolinians of note. Responsible for extending the family mercantile activities into North Carolina after his parents' return to England, Jones spent a good part of his efforts from 1700 to 1710 in prosecuting the interests of family and friends in the colony's courts. His litigation with Thomas Cary made him a natural member of the anti-Cary faction led by Thomas Pollock, with whom he became allied during the latter's self-imposed political exile in Virginia.

Jones, a vestryman of Bruton Parish and "Director of Building" in Williamsburg, added thousands of acres to the family holdings in Virginia. Nevertheless, by 1710 when he settled in Chowan Precinct he had already supplied the glebe lands for the precinct's parish, St. Paul's, and patented 27,500 acres in Carolina. His estates continued to grow until his death, by which time he had patented 35,150 acres including a 17,000-acre estate in Chowan in 1721. To his career as merchant-lawyer, he added those of planter and politician.

As a member of the faction headed by Thomas Pollock and William Glover, Jones was involved in the struggle with the opposing party of Thomas Cary and John Porter that resulted in the unsuccessful Cary's Rebellion against the newly formed Hyde government (1710). The continuation of this conflict can be seen in the opposition of Edward Moseley, Cary's nominal ally, and the Vail, Moore, and Lillington family connections to Governor Charles Eden and his Council, of which Jones was a member. It is further reflected in the opposition of the Assembly led by Moseley to Governor Burrington.

The ascendancy of the Hyde government backed by Pollock coincided with Jones's permanent residence in the colony. In 1711 he served in the Assembly, but after his plantation was devastated in the Tuscarora War (1711–13) he returned to Virginia, serving as a justice of the peace in James City County in 1714. The year 1715 marks the beginning of his rapid political preferment. Returning to North Carolina, he was appointed vestryman of the Eastern parish of Chowan, became a commissioner of the library of St. Thomas Parish, Pamtecough Precinct (Beaufort County), and sat in the Assembly in 1715. He also became the deputy of Lord Proprietor Joseph Blake in 1716, taking his seat in the Council and serving until 1729, during which time the Council tried the case against Tobias Knight and the crew of pirate Teach (1718). In addition, Jones was chief justice of the General Court (1718–21), in which capacity he presided at the trial and conviction of Moseley on charges of "high crimes and misdemeanors" for seizing the records of the secretary of the colony. Ironically, Jones and Moseley remained friends until the former's death. Jones also served the colony in special capacities—as inspector of the boundaries of the Chowan Indian lands, boundary commissioner in the dispute with Virginia, and inspector in the controversy over illegal lapsing of patents, all in 1718; and as inspector of the boundaries of the Tuscarora settlement on the Moratuck (Roanoke) River in 1721.

At his death Jones's will divided his land among his three minor sons, William Harding, Frederick, and Thomas, who were then attending William and Mary Grammar School and in the care of their uncle, the chief executor of the estate. The entail on these properties was broken in 1759 by Jones's grandsons, Frederick and Harding. The remainder of the estate—personal property and the people who were enslaved by Jones—fell to all six heirs including his daughters Jane (married to John Cotten), Martha, and Rebecca. The Virginia-Kentucky line of the family is descended from Jones's brother, Thomas, who in 1722 married the widow Elizabeth Pratt, daughter of William Cocke, secretary of state of Virginia.

Jones, Lewis H. "Some Recently Discovered Data Relating to Capt. Roger Jones Who Came to the Colony of Virginia With Lord Culpeper in 1680, Including Several Letters Written by Him While a Captain in the British Navy." William and Mary College quarterly historical papers 27, no. 1 (July 1918). https://archive.org/stream/williamandmaryc00marygoog#page/n29/mode/2up (accessed June 10, 2013).

"An act, to dock the intail of certain lands now in possession of Harding Jones, under a devise in the will of Frederick Jones, Esq.; his grand-father, deceased, by whom the same were intailed." Collection of the private acts of the General Assembly of the state of North Carolina: from the year 1715, to the year 1790, inclusive, now in force and use. New Bern: Francois-Xavier Martin. 1794. http://digital.ncdcr.gov/cdm/ref/collection/p249901coll22/id/78841 (accessed June 10, 2013).