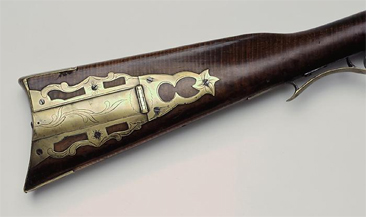 David Kennedy, gunsmith and Revolutionary War soldier, was the son of John Alexander and Mary Tandy Thomas Kennedy. She was the widow of John Thomas of Maryland. The elder Kennedy was a noted gun maker in Philadelphia, where he furnished guns for the Continental Army until forced to flee to North Carolina after Philadelphia fell to the British in September 1777.

David Kennedy was the oldest son and widely known as an excellent fiddler. With a partner, William Williamson, David, having learned the trade from his father, began a gun factory in what is now the northeastern corner of Moore County, near present-day Robbins. He soon bought his partner's interest, and at least for a time his brother Alexander, and perhaps another brother John, worked with him. An old mill was purchased on Bear Creek, a dam constructed across the creek, and water-powered machinery installed. Using power drills, riflers, hammers, and polishing machinery, the brothers soon did a large business. The earliest name of the community was Mechanicks Hill and the factory was called Mechanicsville. In 1810 it was reported that David made a profit of about $15,000, while his brother Alexander earned $1,000. In that year the factory made 650 rifles valued at $9,500. During the War of 1812 it had a government contract to make "Yauger" rifles, which were tested on a range that fired across Bear Creek. At the time of its peak production the factory employed more than seventy-five workmen, but after the war only a few dozen were employed. Some of the rifles from the Kennedy shop still exist.

From 1787 to 1790 Kennedy served in the General Assembly, and by 1835 he was receiving a pension for Revolutionary War service. Towards the end of his life misfortune befell him after he became surety for his brother Alexander's investment in a store. Alexander was too generous in granting credit to his customers, and his financial condition became so bad that he had to sell the business. To meet the loss, David was also obliged to dispose of his gun factory, his 778 acres of land, and his large, beautiful home. Facing financial ruin, Kennedy packed his few belongings and moved to Alabama where he died after a few years. Some years later gold was discovered on the land formerly owned by Kennedy, and it produced many thousands of dollars worth.

David and Alexander Kennedy were trustees of Mount Parnassus Academy at Carthage, chartered in 1809. In the early 1820s David gave the land and paid for building the Mechanics Hill Baptist Church, reportedly the first place of worship in upper Moore County.