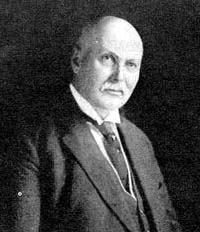 Edward Dilworth Latta, industrialist, was born in the South Carolina summer resort village of Pendleton, the oldest of three sons of James T. and Angela Wetherell Lott Latta. He attended Pennington Seminary in New Jersey, his mother's native state, but was unable to continue his education at Princeton because of the death of his father. Latta began his business career as a salesman in a New York clothing store, but after a brief time he became a traveling salesman. In 1876 he moved to Charlotte and operated a clothing store, which he soon sold when he began purchasing real estate. On the outskirts of Charlotte, he bought a thousand acres and named the property Dilworth in memory of his grandmother. Latta bought a streetcar line, electrified it, and began selling lots at the end of the line in Dilworth. He organized the Charlotte Consolidated Construction Company in 1890 to develop his real estate and to operate the Charlotte Electric Railway, Light and Power Company. In 1911 he employed the noted landscape firm of Olmsted in Boston to design four hundred acres in his subdivision. This became Charlotte's first suburban expansion.

Latta also acquired considerable property on South Tryon Street about 1919 and with J. B. Duke, who had bought his street railway system, he built the Mercantile Building on First Street. He also erected the Latta Arcade and the Latonia Building on South Tryon. He gave the city over forty acres for use as a public park without restriction as to race.

In 1923 Latta moved to Asheville for health reasons and invested heavily in Asheville real estate. He died there from a paralyzing stroke. A member of the First Presbyterian Church in Charlotte, he was buried in that city's Elmwood Cemetery. His will created a continuing endowment estimated at more than a million dollars with the income going to Union Theological Seminary, Richmond, Va., and to the North Carolina Orthopedic Hospital and the Memorial Mission Hospital, both in Gastonia.

In 1877 Latta married Harriet Nisbet of Macon, Ga., and they became the parents of two sons, Marion Nisbet and E. D., Jr., and a daughter, Janet Acton (Mrs. William Haskell Porcher). Harriet Latta died in 1910, and in 1918 he married Jeannie Lea of Vicksburg, Miss.

J. B. Alexander, Biographical Sketches of the Early Settlers of Hopewell Section (1897).

Latta in the Charlotte-Mecklenburg Story: http://www.cmstory.org/content/latta

Mission Hospital is in

Mission Hospital is in Asheville, not Gastonia.