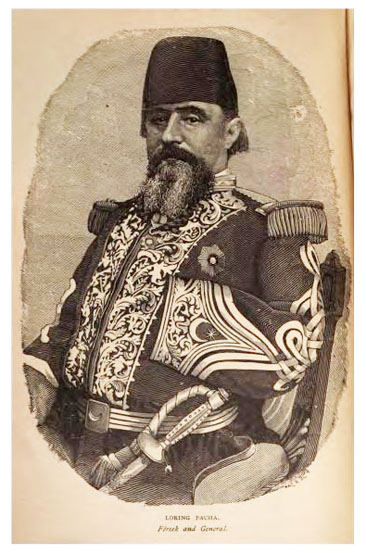 William Wing Loring, a soldier of many wars under several flags, was born in Wilmington, the son of Reuben and Hannah Kenan Loring. He grew up in Florida, where at age fourteen he first saw action with the Second Florida Volunteers against the Seminoles. During his teens, he participated in the encounters of Wahoo Swamp, Withlacoochee, and Alaqua. On 16 June 1837, when only nineteen, he earned his second lieutenant's commission. Loring received his education at Georgetown College, studied law under Senator David L. Yulee, and was admitted to the Florida bar in 1842. He became a member of the first legislature of Florida, serving three years. In May 1846 he was appointed senior captain, Mounted Rifles, U.S. Army, and in February 1847 he became a major. During the Mexican War he played an active role in General Winfield Scott's campaign from the landing at Vera Cruz to the capture of Mexico City, serving as regimental commander at Contreras. In the storming of Chapultepec, he lost his left arm. For his actions he was brevetted lieutenant-colonel in August 1847 and colonel a month later; he also received a sword from the citizens of Florida.

Loring decided to remain in the regular army and in March 1848 was given the permanent rank of lieutenant colonel. In 1849 he led his regiment with a train of six hundred mule teams 2,500 miles across the continent from Fort Leavenworth to the mouth of the Columbia River, "undergoing great hardships and not losing a man." This feat won him widespread recognition. From 1849 to 1851 Loring commanded the Department of Oregon, and from 1851 to 1858 he fought numerous engagements with the Indians in Texas and New Mexico. According to one source, "His Indian experience on the great plains . . . is probably unsurpassed. He battled . . . all the warlike tribes except the Sioux." His Indian exploits led to his promotion to colonel in December 1856, "the youngest line colonel in the old army." In 1858–59 Loring and his regiment participated in the Mormon war in Utah. A leave of absence in 1859–60 provided him with the opportunity to study military tactics and armaments in Egypt and Europe. On his return, he commanded the Department of New Mexico until his resignation from the army in May 1861.

The Confederacy promptly recognized Loring's military record by commissioning him brigadier general one week after he resigned from the U.S. Army. Six weeks later, he assumed command of the remnants of Robert S. Garnett's shattered brigade in western Virginia. Controversy whirled about him for six months until his promotion to major general in February 1862. The controversy involved an encounter with Robert E. Lee in August and a vicious disagreement with Thomas J. (Stonewall) Jackson during the Romney campaign. Loring's promotion and transfer to southwestern Virginia were more of a rebuke of Jackson and Joseph Johnston than the result of Loring's achievement. Assigned to the Army of Mississippi late in 1862, Loring fought as a division commander under John C. Pemberton. His force escaped capture at Vicksburg, and Loring earned the nickname "Old Blizzards" at the Battle of Fort Pemberton atop a parapet cheering his men on with, "Give them blizzards, boys! Give them blizzards!"

Loring accompanied Leonidas Polk to join the Army of Tennessee in Dalton, Ga., in early 1864. In the subsequent campaign he handled his division ably, assuming command of Polk's corps on 14 June, when the latter was killed at Pine Mountain. Loring directed the corps for a difficult month of constant fighting until relieved by A. P. Steward. On 28 July he was severely wounded at Ezra Church. Nevertheless, he returned to the field, serving as a division commander under John Bell Hood, and was present at the surrender in North Carolina in April 1865.

After trying his hand at banking in New York, Loring entered the service of the khedive of Egypt as brigadier general. Immediately given important commands, he succeeded in earning further promotions, "the Dignity of a Pasha," and the orders of the Osmanli and of the Medjidie. By 1875, during the Abyssinian war, Loring commanded the Egyptian army.

In 1879 he left the Egyptian service and returned to the United States where he devoted himself "to literary pursuits, and became a gentleman of leisure," dividing his time between Florida, Chicago, and New York. In 1884 he published a narrative of his most recent military career, A Confederate Soldier in Egypt, but died before he could complete his autobiography, "Fifty Years a Soldier."

Short, heavy-set, and unmarried, "Old Blizzards," or "Fereck Pasha," "was not only a very charming companion, he was altogether a remarkable man. A braver man never lived." He died at the St. Dennis Hotel in New York City and was buried in St. Augustine, Fla.