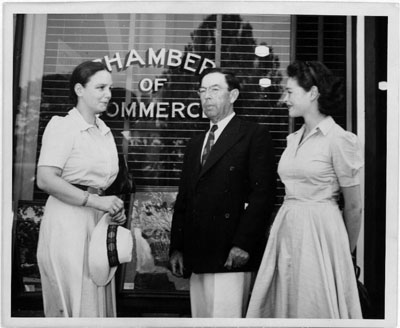 Bascom Lamar Lunsford, performer and collector of folk music and organizer of folk festivals, was born in Mars Hill, Madison County. He was the son of James Bassett and Luarta Leah Buckner Lunsford and the great-grandson of Thomas Shepard Deaver, a founder of Mars Hill College. Having grown up in a rural area where folk songs, ballads, and instrumental tunes provided entertainment in homes, at square dances, and at other social functions, Lunsford developed an early appreciation for this music. He and his brother Blackwell were accomplished fiddlers by their teens, and they often performed for neighbors and at school entertainments. Even as a young man Lunsford sought songs and tunes from family, friends, and acquaintances, learning to sing and play them in order to collect and preserve them.

Following graduation from Camp Hill Academy in Leicester (Buncombe County), he enrolled in Rutherford College in 1901. A year later he accepted a teaching position in Madison County. After leaving that post Lunsford worked for two years for the East Tennessee Nursery Company, traveling on horseback to sell fruit trees throughout western North Carolina and adjacent states. This job enabled him to contact families in remote areas and collect even more songs and tunes. He returned to Rutherford College from 1906 to 1909, then taught school in McDowell County. In 1912, having studied law on his own, he entered Trinity College (now Duke University) as a second-year student where he studied under Samuel Fox Mordecai. He received his law degree and license to practice in 1913. Returning to western North Carolina, he pursued a number of occupations during the next decade. These included practicing law, newspaper publishing, and investigating draft evaders for the U.S. Department of Justice in New York.

Lunsford's interest in collecting folk songs brought him to the attention of the growing number of folklorists following the British collector Cecil Sharp, who toured the southern mountains between 1916 and 1918. Although Lunsford never met Sharp, he did make the acquaintance of his assistant, Maud Karpeles. Lunsford contributed innumerable items to Frank C. Brown of Duke University for the North Carolina Folklore collection. In 1925 he accompanied Dr. Robert W. Gordon, the first head of the Library of Congress Archive of Folksong, on a search for ballads and songs in western North Carolina and South Carolina. Gordon encouraged Lunsford to continue collecting and preserving the songs and to be thorough and systematic in his approach. Dr. Dorothy Scarborough, from Columbia University, also toured the mountains with Lunsford in 1930. As a result of these contacts, in March 1935 Lunsford received an invitation to go to New York to record his "personal memory collection" for Columbia; the collection included 315 items. In 1949, in a two-week marathon session, Lunsford recorded 330 items for the Library of Congress. Up to that time his was the largest repertory that a single informant had contributed to the Archive of Folksong.

In addition to collecting traditional songs, Lunsford composed several new ones, including "Good Old Mountain Dew" in 1920. In 1929 he and composer Lamar Stringfield collaborated on 30 and 1 Folk Songs from the Southern Mountains, a volume of songs arranged with musical accompaniment. Lunsford's major contribution to the perpetuation of folk music was the formation and promotion of folk festivals. In 1927 he advised the Asheville Chamber of Commerce to add a program of dancing and singing to its Rhododendron Festival. The program was so successful that the Mountain Dance and Folk Festival was established the next year. Lunsford organized or helped to found numerous festivals throughout his life, including the first National Folk Festival in St. Louis in 1934.

A high point in his career as a performer and promoter occurred in 1939, when he and his Soco Gap dance team performed at the White House for President and Mrs. Franklin D. Roosevelt and King George VI and Queen Elizabeth of Great Britain. In 1949 Lunsford represented the United States at the first International Folk Festival in Venice, Italy. He spent his later years at home in South Turkey Creek, near Leicester, where he continued to receive and entertain visitors and to participate in local festivals until his death at age ninety-one. He was buried in the Old Brick Church Cemetery, Leicester.