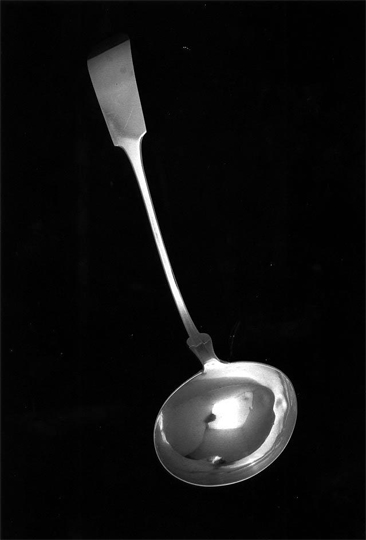 Lemuel Lynch, silversmith and watchmaker, was born at Back Creek, the son of Moses and Susan Dickey Lynch. He was trained as a craftsman in the Hillsborough shop of William Huntington, one of the best known silversmiths of his day and son of the prominent Roswell Huntington. In the Hillsborough Recorder of 30 July 1828, William Huntington recommended Lynch to the public and announced that he had sold his materials and rented his tools to Lynch. Two years later Lynch advertised in the Greensboro Patriot that he had a shop in that city and was prepared to do all kinds of work in silver. In 1832 he stated in the Western Carolinian that he was operating a business in Concord. However, by 18 Mar. 1834 the silversmith was back in Hillsborough where he remained for the rest of his life. Other than during a two-year partnership with William Huntington from 1834 to 1836, Lynch operated his shop alone except, perhaps, with the assistance of his sons or apprentices.

Although there is nothing to indicate any exceptional interest in politics, Lynch was a successful businessman and a civic-minded individual. An account book preserved in the Duke University Library reveals that many distinguished residents of Hillsborough were among Lynch's regular customers. In 1841 he was appointed a justice of the peace and thereafter held court in the town. It was he who repaired the famous cupola clock when the courthouse was built in 1844 and who regulated the clock thereafter.

An open letter to William A. Graham, published in the Raleigh Sentinel on 21 Sept. 1865, was signed by Lemuel Lynch and nine other "neighbors and friends." This letter, preserved in the Graham Papers, the Southern Historical Collection, at the University of North Carolina, Chapel Hill, expressed confidence in Graham and the hope that he would be pardoned so he could be elected as a delegate to the state convention. This, of course, referred to the fact that Graham, as a Confederate sympathizer, had to obtain a pardon before he could enjoy the rights of a citizen after the Civil War.

On 25 Sept. 1828 Lynch married Margaret W. Palmer, of Hillsborough, a niece of Mrs. Roswell Huntington. There were three sons who learned the art of silversmithing from their father: Thomas M. (1829–81) of Oxford; Seaborn J., who inherited his father's silversmithing tools and worked intermittently as a craftsman; and L. George, who worked with his father.

Lemuel Lynch died in Hillsborough. The extant pieces of silver known to have been made by him are expertly crafted and are obviously the work of a skilled artist.

I have one on my Great, Great

I have one on my Great, Great Grandfather's spoons. It is approximately 8 3/4" long. I would love send you an image, if you are interested.

Thanks so much for visiting NCpedia and for sharing the comment about your great, great grandfather's spoons! That sounds like an amazing family heirloom! You can learn more about supporting the Government & Heritage Library's collection here: https://statelibrary.ncdcr.gov/ghl/services/support-our-collection You can also contact our staff who work on NCpedia directly through the contact form on this page: https://www.ncpedia.org/contact Those might be some good contacts for sharing the image of the spoon!

Would you happen to know when the L.Lynch mark on silverware was discontinued? I was given some old silverware a few months ago and I have found 1 silver spoon with the mark on the back. I have looked everywhere online and can't seem to find very much information on Lemuel Lynch's silverware. Only that he made it as a silversmith. Any information would be greatly appreciated.

Thank you for visiting NCpedia and for taking time to share your artifact and question..

I’m afraid NCpedia doesn’t have any additional information on Lynch’s silver or use of the hallmark.  The image in the NCpedia entry came from the collections of the North Carolina Museum of History.  They may be able to give you a bit more information on Lynch’s work.  Here is a link to their “contact and expert” page: http://ncmuseumofhistory.org/collections/contact-expert

Also – you may find some help in a book of hallmarks.  Here is one that I’ve located in particular:

If you visit the link to the book on WorldCat you can search for libraries near you that may have the book (as well as other books on the same topic) or your local library may be able to get the book by interlibrary loan -- http://www.worldcat.org/oclc/8806230.  (WorldCat is an online catalog that searches the holdings of libraries all over the world.)