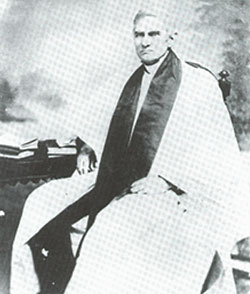 Richard Sharpe Mason, Episcopal clergyman and educator, was born on the island of Barbados in the West Indies and came to the United States with his parents when he was quite young. In 1812, at age seventeen, he was graduated from the University of Pennsylvania, and on 21 Sept. 1817 in Philadelphia he was ordained deacon in the Episcopal church. In the spring of 1818 he became rector of Christ Church, New Bern, N.C., where he remained for ten years. However, it was not until 30 Apr. 1820 that he was advanced to the priesthood by the Right Reverend Richard Channing Moore of Virginia in St. Paul's Church, Edenton. While he was in New Bern, the parish built its second brick church to replace the smaller colonial edifice. It was consecrated on 1 Feb. 1824 by the Right Reverend John Stark Ravenscroft, first bishop of the Diocese of North Carolina.

As an earnest pastor, Mason worked to win religious converts. Among them was Jarvis B. Buxton, who gave up his business, was ordained deacon and priest, and served as rector of St. John's Church, Fayetteville. At the 1826 diocesan convention Mason reported that he was giving instruction in catechism and lectures on the scriptures to "colored" residents. Numerous infants he baptized were named for him. He kept neat, meticulous records of all his official acts.

Although comparatively young, Mason is said to have been quite absentminded. Once in planting vegetables in his garden, he put the peas in his pocket and his spectacles in the ground.

His transfer to the Diocese of Pennsylvania was reported in 1828. Later the same year he became rector of St. Matthew's Church, Geneva, N.Y., and the next year he was appointed acting president of Geneva (now Hobart) College. Also in 1829 the University of Pennsylvania awarded Mason a doctor of divinity degree. Still president of Geneva College in 1835, he declined a call to return to New Bern but did accept the presidency of Newark College in Delaware. In 1840, however, he returned to North Carolina as rector of Christ Church, Raleigh, where he remained until his death. The Episcopal church was relatively weak in North Carolina, and in both New Bern and Raleigh Mason engaged in extensive missionary work, thereby enlarging church membership and support.

When the Reverend Mr. Mason was at Christ Church, New Bern, the congregation gave him the large Book of Common Prayer presented to the parish by King George II in 1752, the year in which it was published. As Mason had requested, it was returned to the parish by his widow after his death.

While Mason was in North Carolina, there was considerable controversy in the state over the Episcopal practice of infant baptism. In support of the rite, Mason wrote a pamphlet published by his son in the year of Mason's death. He also was the author of A Letter to the Bishop of North Carolina on the Subject of His Late Pastoral, published in New York in 1850.