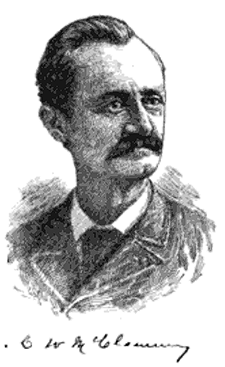 Charles Washington McClammy, Confederate officer, congressman, legislator, and farmer, was born at Scotts Hill, a farming community on the New Hanover–Pender County line, the son of Luke S. and Anna Chadwick McClammy. His father and grandfather were planters who held land granted in the eighteenth century. After attending Scotts Hill Academy, McClammy was graduated from The University of North Carolina in 1859. He taught at and became principal of the Black River school in Pender County. In 1860 he married Margaret Fennell, whose father was sheriff and a political leader of New Hanover County.

With the coming of the Civil War, McClammy helped organize a Confederate unit which became Company A of the Third North Carolina Cavalry. He was a captain from September 1863 and a major after December 1864. He served in eastern North Carolina, particularly around New Bern, until May 1864, when his unit was sent to join the Army of Northern Virginia. Following engagements there, his troops disbanded on the road to Appomattox Courthouse in the spring of 1865.

As a Democrat, McClammy represented New Hanover County in the North Carolina General Assembly between December 1866 and March 1867 and was a member of the state senate in the session of 1870–72 which impeached Governor William Woods Holden. He was elected by large majorities to the Fiftieth and Fifty-first Congress, serving from 1887 to 1891, but was defeated for reelection in 1890 by Benjamin F. Grady of Duplin County, a classmate at The University of North Carolina. McClammy returned to the family farm and was killed a few years later when a steam boiler exploded. He was buried in the local family cemetery near Scotts Hill.