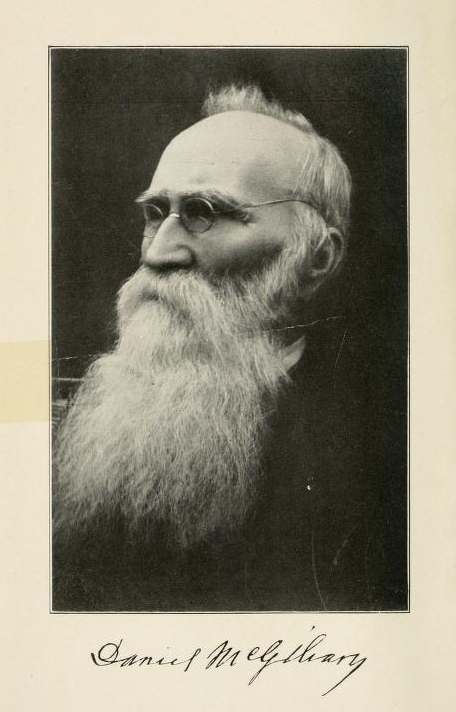 Daniel McGilvary, missionary to Siam, was of Highland Scottish ancestry. The son of Malcolm and Catharine McIver McGilvary, he was born in Moore County. Following his father's death, Daniel, at age thirteen, moved to Pittsboro to learn the tailor's trade. At the same time he attended a local academy. He later enrolled in the Bingham School, then at The Oaks, where he completed his studies in May 1849. After teaching for four years in Pittsboro, he entered Princeton Theological Seminary, graduating in 1856. On 14 June of that year the Orange Presbytery licensed him as a ministerial candidate. McGilvary supplied the Carthage and Union Presbyterian churches for a period during 1856–57. On 13 Dec. 1857 the Orange Presbytery ordained him to the ministry "as an Evangelist with a view to his entering upon the work of a missionary to Siam."

After a passage of "only one hundred days," McGilvary landed at Bangkok on Sunday, 20 June 1858. His ministry in Siam revolved around three centers. From 1858 to June 1861, he lived and worked in Bangkok. Pechaburi was the scene of his activities from the latter date until January 1867. From April 1867 until his death, his base of operations was at Chiengmai in the northerly province of Laos.

After coming in contact with some of the people from Laos at Pechaburi, he made an exploratory tour to Chiengmai, then moved there, reaching the city on 3 Apr. 1867. McGilvary readily accommodated himself to the travel facilities of his adopted homeland. The Mission Board in New York considered his suggestion that an elephant be purchased for such purposes a great joke, but he later acquired two of these animals which were his means of transportation to Presbytery meetings and in making extended exploratory tours throughout Laos.

With no physician within hundreds of miles, he undertook to provide certain basic remedies for the sick. He incurred the animosity of the prince when his grandson died from the effects of McGilvary's vaccination. The acceptance of Christianity by a number of leaders in the region accentuated this opposition, and two Christian converts were clubbed to death on the prince's orders. Although in dire danger, McGilvary and his family remained at their post, and he boldly confronted the prince with his actions before a commissioner from Bangkok who had been sent to investigate the matter. In the role of missionary-statesman, McGilvary succeeded in obtaining a decree of religious toleration from the king of Siam as a climax to a controversy involving efforts to eliminate a pagan practice from the marriage ceremony of two Christians.

McGilvary demonstrated his competence as a scholar by translating the Books of Ezekiel and Jonah from the Hebrew into Siamese and, assisted by his wife, the three Epistles of John and the Epistle of Jude from the original Greek into Siamese, as well as the Gospel of Matthew from Greek into the language of the Lao. He received an honorary D.D. degree from The University of North Carolina in 1880 and an LL.D. from Davidson College in 1906. The McGilvary Theological Training School at Chiengmai was established to memorialize his work.

On 6 Dec. 1860, in Bangkok, he married Sophia Royce Bradley, the daughter of Dr. D. B. Bradley, a veteran missionary to Siam. They became the parents of two sons and three daughters. McGilvary died and was buried at Chiengmai. His autobiography, A Half Century among the Siamese and the Lao, was published a year after his death. This volume has an excellent photograph of its author.

Arthur Judson Brown, One Hundred Years: A History of the Foreign Missionary Work of the Presbyterian Church in the U.S.A. (1936).

Daniel McGilvary, A Half Century among the Siamese and the Lao (1912).

Daniel McGilvary, A Half Century among the Siamese and the Lao (1912).