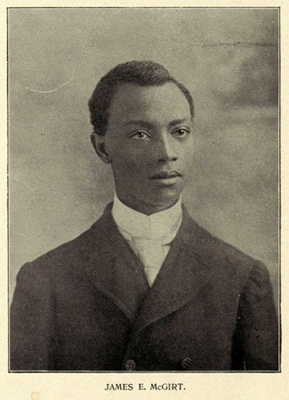 James Ephraim McGirt, black poet, editor, and publisher, was born in Robeson County near the town of Lumberton. The son of Madison and Ellen Townsend McGirt, he grew up on the family farm and was sent to a private school near Lumberton. Later the family lived on a farm near Rowland before finally moving to Greensboro. There James attended public school, worked at odd jobs, and began to write verse. In 1892 he enrolled in Bennett College, a Methodist-affiliated institution then just outside Greensboro. What he did immediately afterwards is not known, but in the preface to his first book, Avenging the Maine, a Drunken A.B., and Other Poems (1899), he blamed exhausting manual labor and a lack of leisure time for the slimness of the volume and the feebleness of the verse. Whatever his employment, it did not prevent him from revising and enlarging the first edition of this work in 1900, as well as issuing in the next year a new collection of poems entitled Some Simple Songs and a Few More Ambitious Attempts.

The publication in 1901 of a third revised and enlarged edition of Avenging the Maine by a Philadelphia printer rather than the Raleigh firm that had prepared the first two editions indicates the direction in which McGirt's ambitions would take him in 1903. After briefly residing in Hampton, Va., he established himself in Philadelphia where, in September 1903, he issued the first number of McGirt's Magazine, an illustrated monthly dealing with the activities of black Americans in art, literature, science, and general affairs. Although his duties as editor and publisher of the magazine consumed most of his time and all of his savings, McGirt continued to write music and poetry while living in Philadelphia. For Your Sweet Sake: Poems (1906), his third book of verse, testified to his abiding wish to win recognition for himself as a poet. In 1907 he published his last book, a volume of short stories entitled The Triumph of Ephraim.

In 1909 McGirt's Magazine, reflecting its declining sales, changed from a monthly to a quarterly. A year later it ceased publication, as McGirt decided to return to Greensboro to join his sister in managing the Star Hair Grower Manufacturing Company. After accumulating a considerable amount of property in and around Greensboro, he became a realtor. At his death he was remembered as "one of the best-known Negro citizens of Greensboro." He was buried in Maple Cemetery.

McGirt's contribution to literature was small. His first book of verse is, as he recognized, amateurish and undistinguished. His technical skill increased with each volume that he published, but he was never a sure metrist or a skilled rhymer. McGirt's understanding of the art of the short story was equally uncertain. The stories in The Triumph of Ephraim usually deal with problems or romantic love encountered by youthful and largely unindividualized black heroes and heroines. A few of his stories are set in North Carolina, but little particularity is given to these settings in McGirt's fiction. Unlike his poems, which, despite their lack of polish, often give evidence of deep personal feelings, McGirt's short stories reveal both the lack of experience and the uncertainty of purpose that together account for the author's brief and unsuccessful literary career.

Neither McGirt nor any of his three siblings ever married.

James E. McGirt. 1901. Image from Avenging the Maine, a drunken A.B., and other poems. Online at https://archive.org/details/avengingmaine00mcgirich. Accessed 02/11/2013.

I have an original signed

I have an original signed first edition , i wish to dispose of .. could you advise me ? thank you , hoping for a reply

Please email me i you still

Please email me i you still have th original signed first edition of this painting.
Thank you!

I'm from Rowland NC but

I'm from Rowland NC but currently residing in Raleigh NC. I'm interested in acquiring the book if you still have it. It would mean a great deal to my family if we could acquire any of his publications especially an originall signed copy!!! My cell number is 919 906 1847 and you have my email. I'm praying that it is still available.
N

Please feel free to email me

Please feel free to email me if you still have the book.

Thank you for using NCpedia. Unfortunately, we do not provide information regarding book apprasial here at NCpedia. You may want to contact a book dealer as a starting point for your research. Here is a link to the WorldCat entries related to James McGirt literature, which provides information about the availablity of his books. I hope this information helps. If you need further help, please feel free to contact me via email at emily.horton@ncdcr.gov or Reference Services at slnc.reference@ncdcr.gov.