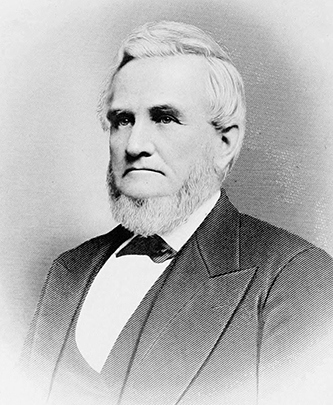 Nereus Mendenhall, educator, physician, civil engineer, and legislator, was born at Jamestown, the son of Richard and Mary Pegg Mendenhall. Jamestown was named for his grandfather, James Mendenhall, who had come to North Carolina from Chester County, Pa. James was the son of John Mendenhall, one of three Mendenhall brothers who immigrated to Pennsylvania from the Manor of Mildenhall in Wiltshire, England. Nereus's mother was the daughter of Valentine and Mary Cook Pegg. Both sides of his family were of Quaker stock.

Young Mendenhall was a delicate and sensitive child who early manifested a love of reading and study. He was educated in the village schools of Jamestown, one of which was conducted by his father and was also open to slave children. To help meet expenses for his college education, he worked in a printing office in Greensboro while continuing his studies. He entered Haverford College in Pennsylvania as a freshman in 1837 and finished the four-year requirements with honors in two years. Mendenhall returned to North Carolina in 1839 to become the principal teacher of New Garden Boarding School. A distinguished Latin and Greek scholar, he was also widely read in philosophy. As busy as he was with his many duties at the boarding school, he still found time to "read" medicine and prepare for entrance into Jefferson Medical College, Philadelphia, from which he was graduated in 1845. Although he established a successful medical practice in his home community, Jamestown, his sensitive nature made him overanxious for his patients and his health suffered to such a degree that he abandoned medicine. Believing that time spent outdoors would be beneficial, he accepted a position as civil engineer with the North Carolina Central Railroad. At intervals throughout his life, he alternated this work with service in various capacities at the New Garden Boarding School. He finally left the school for good in 1867, having served for a total of twelve years.

In 1851 Mendenhall married Oriana Wilson, a native of Mississippi though of Nantucket, Mass., Quaker stock. They had met while he was teaching at New Garden and she was a student. Following the outbreak of the Civil War, Nereus came under serious suspicion for his Quaker attitudes on slavery and for his hostility to war itself. On one occasion, he narrowly avoided being caught in possession of incendiary literature against slavery.

Mendenhall's natural inclination was to teach, and he said many times that when he was doing other things—enjoyable perhaps in themselves—he was wasting his time. The fundamental thing was to instill in young people's minds a love of truth, and he challenged students to think for themselves. He firmly believed that true education was the great lever to lift men to higher and nobler views of life. From time to time he was involved with other Quaker schools. At Haverford College he was a member of the faculty and superintendent for two years; he also taught for two years at Penn Charter School in Philadelphia. Mendenhall was deeply committed to coeducational education, which New Garden Boarding School adopted as a matter of principle at its founding in 1838. This principle found application in the education of his own five daughters. One was a graduate of Wellesley College and taught mathematics at the Woman's College at Greensboro for many years. Another, Mary, was a graduate of the Howland's School on Lake Cayuga, N.Y., and wrote extensively in the area of public affairs; she married L. L. Hobbs, the first president of Guilford College after its transition from New Garden Boarding School in 1888. Also concerned about public education in North Carolina, Mendenhall served as chairman of the Board of Examiners of Public School Teachers for more than forty years.

Twice he was elected to represent Guilford County in the state legislature. Appointed to the board of directors for the State Hospital for the Insane at Morganton, he was instrumental in having it called a hospital rather than an asylum and assisted with planning and construction. An active and highly concerned Quaker, Mendenhall participated in numerous Quaker missions, including one to Jefferson Davis, president of the Confederacy, to speak on behalf of the cruel treatment of conscientious objectors. He served the North Carolina Yearly Meeting as assistant clerk from 1845 to 1849 and as clerk from 1860 until 1872. He was also a member of the Meeting for Sufferings.

I find this very interesting.

I find this very interesting. I am a direct descendant of Isaac Mendenhall. He is a descent of Benjamin Mendenhall one of the three brothers from Chester County, Pennsylvania. He was married to Dinah Hannum. They were station masters on the Underground Railroad. Their home was on what is now Hillendale Road, Chadds Ford,, PA. Their home is called Oakdale and currently is being lived in. On November 10, 2018, a Pennsylvania Historical Marker was dedicated for Issac and Dinah Mendenhall with mention of Oakdale. The Marker stands so proud on a private property corner of Kennet Pike (Route 52) and Hillendale Rd in Chadds Ford, PA. I was mentored by Robyn Young, aka the Marker Lady. It’s a story that would take more time to tell. I can be reached if you want to know more.