Thomas Miller, acting governor, Council member, secretary, and customs collector, was in North Carolina (then called Albemarle) by 1 Mar. 1672/73. On that date he contracted for shipment of a large quantity of tobacco from Albemarle to England and for his own passage.

In his contract Miller was identified as an apothecary of "Balley Samson in the County of Waxford in Ireland." In other documents related to the shipment, he was identified as a merchant. He seems to have had a fair education and to have had influential connections with the Lords Proprietors of Carolina, with whom he apparently was associated as early as 1669. His behavior, however, did not reflect gentle birth. He was given to vulgar, offensive remarks, and as an official he was abusive and domineering.

In the spring of 1673 Miller sailed from Albemarle on the brigantine Good Hope of Albemarle, bound for England with his tobacco, which he expected to sell in either England or Ireland. The voyage, however, was interrupted in New England, where Miller instituted court action against the master and part owner of the brigantine, Robert Risco. In his suit, Miller charged that the Good Hope was not seaworthy, and he accused Risco of not acting in good faith and other misdoings. In the trial, held in Suffolk County, Mass., a jury found for Risco. Miller appealed the verdict, but the higher court upheld the lower court. By the time the suit was settled, it was mid-fall. Miller apparently abandoned his trip to England and sold his tobacco in Massachusetts, for he was back in Albemarle in November.

Miller was soon in court again, this time as defendant. In November 1673 he was brought before an Albemarle magistrate on the charge of making treasonable remarks about the king and his family. The charge was dismissed, on the ground of insufficient evidence, by a magistrate who, in dismissing the case, remarked that Miller was always saying such things as those charged but meant nothing by them. The case, however, had political aspects of a local nature, for Miller was prominent in the political faction led by Thomas Eastchurch, who was then seeking to oust the acting governor of Albemarle, John Jenkins, and take his place. The charge against Miller was brought by one of Jenkin's supporters, while the magistrate in the case belonged to the Eastchurch-Miller faction. 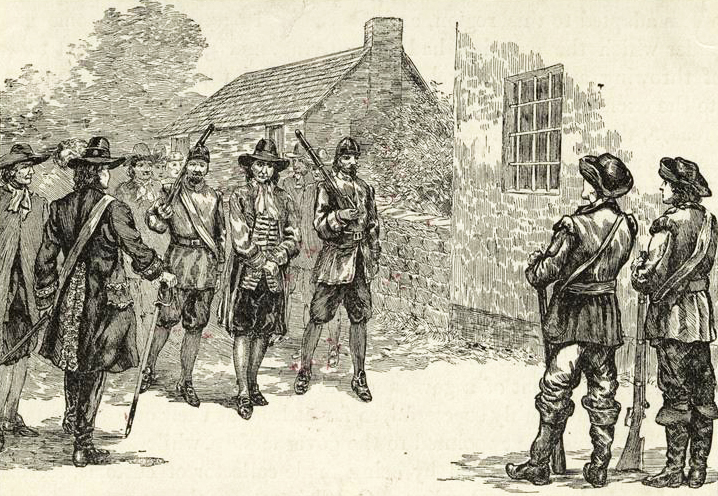 About two years later Miller made another appearance in court, having been charged with blasphemy as well as treasonable remarks. In March 1675/76 he was indicted on those charges and imprisoned pending trial. In May he was taken to Virginia for trial on the order of Sir William Berkeley, who was one of the Lords Proprietors of Carolina as well as governor of Virginia. Miller was acquitted in a trial held by Berkeley and the Virginia Council. After his acquittal, Miller sailed for England. In London he joined Thomas Eastchurch, who had gone there earlier, and the two presented to the Proprietors their version of Albemarle affairs.

In November 1676 the Proprietors issued commissions appointing Eastchurch governor of Albemarle and naming Miller a Council member and register, or secretary, of the colony. In addition to his commissions from the Proprietors, Miller obtained from Crown officials an appointment as customs collector for Albemarle.

In the spring of 1677 Miller and Eastchurch left England to assume their respective offices in Albemarle. They interrupted their voyage at Nevis, where Eastchurch met a wealthy woman and married her. Wishing to remain longer at Nevis, Eastchurch sent Miller to govern Albemarle in his stead, giving Miller a commission naming him president of the Council and acting governor. In so doing, Eastchurch ignored the fact that he had not qualified as governor of Albemarle and consequently had no legal authority to issue such a commission.

Miller reached Albemarle in mid-July 1677. He was opposed with arms by a group of colonists, whose longstanding hostility towards him was intensified by the belief that his commission from Eastchurch was invalid. Miller called out the militia, but few responded, so he hired a guard composed chiefly of Virginians who had participated in the recent Bacon's Rebellion and had fled to Albemarle to escape punishment. Supported by his guard, Miller assumed office as governor. Almost immediately he increased his opposition by abusing the power he had seized. He further antagonized the colonists in his role as customs collector, for he and his assistants zealously collected the detested "penny-per-pound tax" on tobacco, about which their predecessors had been lax.

Among the abuses alleged against Miller were the institution of illegal court procedures through which heavy fines were laid on those who had formerly opposed Eastchurch; illegal imposition of restrictive election procedures and eligibility rules that barred election of his opponents to the Assembly; charging the cost of his armed guard against the public treasury; and levying unusually high taxes, which the colonists considered ruinous.

In early December 1677 Albemarle colonists rose against Miller and imprisoned him and most other officials in his government. After electing a new Assembly and Council, they set up a court to try Miller for his alleged offenses. The trial, however, was interrupted by the arrival of a proclamation from Thomas Eastchurch, who had reached Virginia on his way to Albemarle. On learning of recent events in Albemarle, Eastchurch had decided to remain in Virginia and send a proclamation to Albemarle. In his proclamation, he ordered Miller's release and return to office, but Miller was returned to prison instead. Soon afterwards Eastchurch became ill and died in Virginia. Miller remained in prison for nearly two years, during which time the Albemarle colonists governed themselves.

By August 1679 the Proprietors had restored de jure government in Albemarle. Under authority of the new government Miller was brought before the Palatine's court, which heard testimony against him and remanded him to prison to await further proceedings. That trial, like the earlier one, was never completed, for Miller, with the aid of friends, escaped from prison and fled to Virginia, where he took passage to England.

Miller arrived in England in December 1679. On reaching London, he began a flow of complaints to customs officials and others against Albemarle colonists. His chief target of complaint was John Culpeper, whom the Albemarle colonists had appointed to replace Miller as customs collector. Culpeper, who happened to be in England when Miller arrived, was arrested on Miller's complaint and indicted on a charge of treason for participating in Miller's overthrow and for assuming the office of customs collector. Miller also effected the arrest of Zachary Gillam, a New England trader then in London, whose arrival in Albemarle with a shipload of arms had facilitated the 1677 uprising. The charges against Gillam were soon dismissed, and Culpeper, after a longer trial, was acquitted. Contrary to Miller's expectation, the Lords Proprietors testified at Culpeper's trial that Miller had seized power in Albemarle unlawfully and had committed many illegal acts, so that neither his overthrow nor Culpeper's part in it was treasonable.

Although Miller failed to secure the conviction of Culpeper and Gillam, he was rewarded for his efforts. In response to numerous petitions from him, treasury officials ordered monthly payments to Miller for more than a year. In all, he received more than £244 for his maintenance and as compensation for "his great sufferings" in Albemarle. A series of petitions for reappointment to a customs post also was effective. In March 1680/81 Miller was appointed customs collector of Poole, and in July 1682 he was transferred to a more lucrative post at Weymouth.

Miller's renewed career as customs collector was also brief. By 14 May 1684 he had been removed from office and imprisoned for mishandling funds. He died in prison before October 1685. Available records do not show whether he ever married.

"Miller imprisoned." Illustration. The American continent and its inhabitants before its discovery by Columbus : also the story of its invasion by Spain, France, and England, a unique history. Philadelphia: Gebbie, 1890. New York Public Library. http://digitalgallery.nypl.org/nypldigital/dgkeysearchdetail.cfm?trg=1&strucID=701028&imageID=808224 (accessed February 11, 2013).