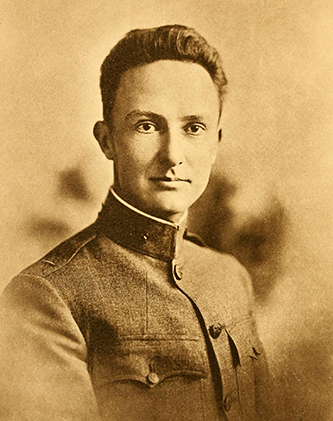 Quincy Sharpe Mills, editor, author, and World War I officer, was born in Statesville, the only child of Thomas Millard and Nannie Sharpe Mills. His father was a merchant and his mother a teacher. Both parents were natives of Statesville and were descendants of sturdy pioneer stock; they grew up in the poverty-stricken days of Reconstruction after the Civil War. Quincy was nurtured on his grandmother's tales of the bravery of his forefathers in their struggles against the Indians, the Redcoats, and the Yankees. Soon reading became a part of his life, and he was an eager student in the schools of his day.

In the fall of 1899 he entered the Oak Ridge Preparatory School, where he completed the two-year course in one year, making an average grade of 99.5. His diploma qualified him for admission to The University of North Carolina, but since he was only sixteen, his parents persuaded him to stay at home for a year. In June 1901 he became ill with typhoid fever and was forced to wait until September 1902 to enroll in the university. His four years there were a delight to him. He was the editor of three student publications and a correspondent for two newspapers. Initiated into Phi Beta Kappa, he won medals and honors in all his work. In sports, he starred on the tennis team and excelled in cross-country running.

A charming account of his junior-year summer vacation, entitled Footing It through the Blue Ridge, first appeared in serial form in the Charlotte Observer. Many of his "Verses, Grave and Gay," short stories, skits, and plays were published.

Immediately following his graduation in 1907, Mills went to New York to seek his fortune in the newspaper world. By his own efforts he obtained a job in the office of the New York Evening Sun as a reporter. In a short time he became city editor, remaining in that post until he volunteered for military service when the United States declared war on Germany in 1917. He had already taken officers' training courses at Plattsburg, N.Y., during his vacations since the war began in 1914. From 1914 until his enlistment, a period of twenty-seven months, he wrote 250 editorials on the European conflict and America's lack of preparedness for its deepening involvement. Intensely patriotic, he felt it was his duty to fight in his country's battles against the forces of evil.

Mills was commissioned a lieutenant and sent to France. He died of wounds received at the Battle of Château-Thierry (3–4 June 1918) in an attack on the German lines that successfully blocked the enemy's advance.

A biography of Mills, One Who Gave His Life, written by James Luby, senior editor of the Evening Sun, was published in 1923; it also includes letters that Lieutenant Mills sent from France. A second volume, Editorials, Sketches, and Stories, containing Mills's short stories and editorials, was published in 1930.

Mills was recognized by journalists as a specialist on state and city political affairs; he wrote constantly of the inner workings of party politics. The range of his interests was worldwide and his vision deep and penetrating. Many causes claimed his pen, and he championed them all with his keen intellect and tireless concern for a better city: more parks and playgrounds, better schools, less pollution, and more adequate transportation. His early twentieth-century concerns were the same as those of the waning days of the century. His philosophy of government, his desire for a good life for all people, his love of freedom, and his willingness to give his life for the principles in which he believed stand as a lasting tribute to the young soldier-writer who made the supreme sacrifice for his beloved country.