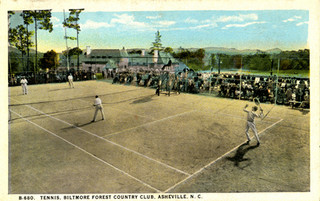 Tennis in its modern form developed in England in the late nineteenth century. In the United States, it was one of the first sports in which women participated in competitive situations. The sport was played as early as the 1880s at the University of North Carolina, when the University Tennis Club was formed. Reports from Pinehurst and Asheville mentioned tennis in the following decade. Pinehurst first hosted its Midwinter Championship in 1911. The North Carolina Open championships were first held in 1912, while the state high school championships were first held in 1916. Many top players, such as Bill Tilden, played in Pinehurst's North and South Tournament in the 1920s.

Competitive college tennis in the state dates back to the early part of the twentieth century. The University of North Carolina had a team in 1907, while North Carolina State University's first team dates from 1922. The UNC men became a dominant team in the 1930s and held their rank under coaches John Kenfield (1928-55), Don Skakle (1959-80), and Allen Morris (1981-93). UNC won 15 Southern Conference titles from 1930 through 1953, claimed 22 Atlantic Coast Conference (ACC) titles in a 25-year period from 1954 through 1978, and produced All-American players such as Bitsy Grant (1931), Vic Seixas (1948), and Freddie McNair (1970-73). Other schools, including Duke University and North Carolina State University, began challenging UNC's supremacy during the 1970s.

Women's tennis was a later arrival on the state's college campuses. UNC's Laura Dupont won the 1970 U.S. Lawn Tennis Association's collegiate national championship at a time when the National Collegiate Athletic Association (NCAA) did not have national championships for women. The following year women's tennis became a varsity sport at UNC. By the early 1980s, most colleges in the state fielded women's teams and offered full scholarships to the top players, as had already been done for male players. Duke University, which began its program in 1973, became the dominant women's team, capturing the ACC title every year from 1988 through 1995 and finishing in the NCAA championship top eight five times during that period. Duke's top players included Julie Exum (1990-93) and Susan Sabo (1988-91).

Other top players from North Carolina were Bo Roddey, Whit Cobb, John Sadri, Buck Archer, and Tim Wilkinson. Durham's John Lucas, who gained fame as a basketball player at the University of Maryland and in the professional ranks, won three state tennis championships in high school and played professionally. Althea Gibson, the first black woman to become a world-class tennis player, honed her game under the tutelage of Hubert Eaton of Wilmington in the late 1940s.

Tennis continued to gain popularity as a recreational sport, especially following World War II. Although still associated with exclusive country clubs, tennis soon appeared on many public courts and in municipal programs. It was not a major spectator sport in the state, however, nor has North Carolina been the site of any major professional tennis tournaments, although the Raleigh Heat played in the World Team Tennis League from 1990 to 1993. This was a professional league that operated for a brief period in the summer, mostly with second-rank professional players.

Plz add amazing facts about it.