William Thomas O'Brien, machinist, was born in Lynchburg, Va., of Irish ancestry. His father was John O'Brien, a laborer, who came to the United States in 1846; his mother was Katherine McLaughlin O'Brien, who also came from Ireland. Brought up in poverty, O'Brien left school at age fourteen and for two years worked in a Lynchburg tobacco factory. At sixteen he was apprenticed to a machinist in Lynchburg and served in that capacity for four years. During the next seven years he worked as a journeyman machinist in several large cities, including Baltimore, Philadelphia, Kansas City, Denver, and St. Paul. For a time he worked on the War and Navy Building in Washington but resigned to become foreman of the machine shops of the Glamorgan Company in Lynchburg. 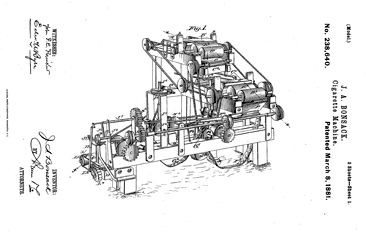 Early in 1881 O'Brien accepted a position with the Bonsack Cigarette Machine Company, also of Lynchburg. His assignment was to install and correct minor defects in the operation of the cigarette machine invented by James A. Bonsack. Almost immediately he was sent to install two cigarette machines in the factory of W. Duke Sons and Company in Durham, N.C., and to instruct the Duke employees in their operation. He remained with the Dukes about six months and then, in 1882, went to Chicago and St. Louis to install and service other Bonsack machines.

Returning to the Duke factory in 1883, he overhauled the machines that were not performing well. The Dukes, recognizing his mechanical ability, offered to hire him on a permanent basis. O'Brien was reluctant to leave Bonsack, where he worked for a salary; the Dukes, with limited resources, wanted to employ him on a contract basis at three cents per thousand cigarettes. In 1883 he accepted the Duke offer. About seven months later, the machines were greatly improved by numerous small changes O'Brien had devised. Business expanded, and soon O'Brien was making money faster than the Dukes. He eventually went to his employers and suggested a change so that the Dukes could earn their proportionate share. As a result, O'Brien became superintendent of the Duke cigarette plant in Durham in 1897. Though he contributed nothing to the basic development of the cigarette machine, O'Brien did create a number of refinements that led to its successful operation. In this way, he played a major role in making possible the formation of the original American Tobacco Company.

O'Brien also participated in the business development of Durham, serving as a director of the Durham Loan and Trust Company, the Erwin Cotton Mills, and the Durham Savings Bank. He was an alderman of the city from 1902 to 1904. A Republican, he served in various capacities in the North Carolina Republican party and was a delegate to the Republican National conventions of 1896 and 1904.

In 1883 he married Catherine Biggins, and they became the parents of four children: William Joseph, John Joseph, Thomas Joseph, and Mary Joseph. He and his wife, both Roman Catholics, made generous donations for the establishment of the Immaculate Conception Catholic Church in Durham. O'Brien also donated to numerous charitable organizations and supported moving Trinity College (later Duke University) to Durham. He died in Durham and was buried in Holy Cross Cemetery in Lynchburg, Va.