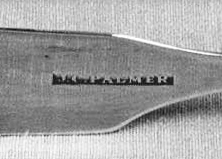 John C. Palmer, silversmith, daguerreotyper, and churchman, was the son of John B. and Sarah Rich Palmer. The Palmers had moved from New Jersey to Rowan County, where they were involved in a number of land transactions. John C. Palmer, one of four children, learned the art of silversmithing from John Y. Savage in Raleigh. It was during his years of apprenticeship that he became an active member of the Edenton Street Methodist Church.

The silversmith was still in Raleigh in 1826, but sometime thereabout he left Raleigh to work for a time in Oxford, Granville County, and in Haywood, Chatham County. On 16 Oct. 1827 Palmer—whose middle name could not be determined—married Maryann (or Mary Anne) Hampton, daughter of the silversmith William Hampton of Salisbury and sister of James Brandon Hampton and Mrs. Philo White (Mary Hampton). Palmer and his brother-in-law, James B. Hampton, operated a jewelers' and watch repair firm in Salisbury known as Hampton and Palmer from 1830 until Hampton's death in 1832. Two years later, on 9 Aug. 1834, Palmer was advertising a branch business in Concord, with the Concord office being operated by a Mr. Bagby of Lynchburg, Va. The two men combined the jewelry and watch repair trades, and Palmer made silver to order.

On 23 Oct. 1840 John Palmer advertised in the Western Carolinian (Charlotte) that he planned to sell at auction most of his household furniture and move from Salisbury to Raleigh. By 18 Nov. 1840 he had returned to Raleigh and was operating a jewelry business and watch repair shop in a new building erected by Richard Smith on Fayetteville Street. By 1845 he had added a daguerreotype gallery to his business operation. Two years later, in 1847, Palmer acquired a partner, Walter J. Ramsay. Upon the partnership's dissolution in 1855, Palmer purchased Ramsay's interest and continued the business until he retired in 1889. Palmer was listed in the Raleigh Register of 30 Mar. 1859 as one of the directors of the North Carolina Institution for the Education of the Deaf and Dumb, and of the Blind. The craftsman, who had been instrumental in the organization of a Methodist church in Salisbury, resumed his activity in the Edenton Street Methodist Church after returning to Raleigh. 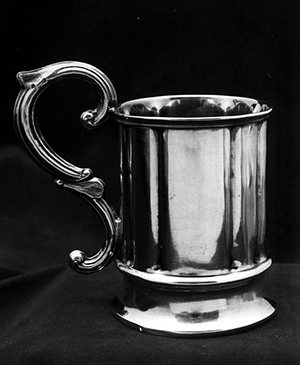 Palmer was married twice, but the death dates of both wives are in question. The frequent occurrence of "Mary Palmer" in county records and newspapers causes confusion. There was in the Western Carolinian of 17 Jan. 1840 this notice: "Departed this life at Hillsborough very suddenly on the 9th inst. Mrs. Mary A. Palmer in the 60th year of her age." The name Mary was common in the family of Martin Palmer of Hillsborough, and it cannot be determined whether or not this was the first Mrs. John C. Palmer. The Charlotte Democrat of 22 Aug. 1871 carried a notice of the death of Mary Ann Hampton Palmer in Raleigh; another source noted that she was "age 60 years 8 months 8 days." The Carolina Watchman of 4 Mar. 1875 announced John C. Palmer's marriage on 25 Feb. 1875 to Mrs. Mary Aphia Young of Chatham County. The fact that both wives were named Mary adds to the dilemma.

Palmer died in 1893 at the home of Mrs. M. J. Brown on North Person Street. The funeral service was conducted at his church and burial was in the City Cemetery. Palmer's grave, evidently unmarked, is believed to be in the family plot where Charles W. Palmer and his wife Sarah J. Palmer were also buried. Their relationship to John C. Palmer has not been determined. No survivors are named in Palmer's obituary and apparently there were no surviving children or spouse. In Raleigh during his final years he was affectionately called "Uncle Johnny."

In partnerships with other craftsmen and working alone, John C. Palmer handcrafted much silver flatware of exceptionally fine quality during his long life; many pieces have been identified in the Salisbury and Raleigh areas—all over the state, in fact—and undoubtedly other pieces will eventually come to light.