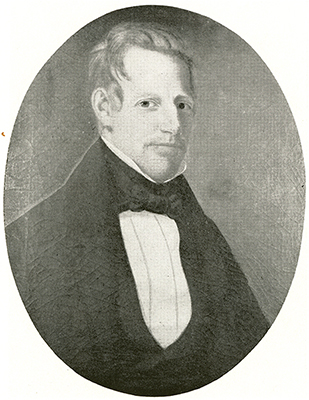 James Washington Patton, contractor and merchant, was born in Wilkes County to James, an Irish immigrant and pioneer to the Yadkin River area, and Anne Reynolds Patton of Wilkes County. When James was four, the family moved to Buncombe County outside of Asheville. There he was educated at Newton Academy and lived in and around Asheville the remainder of his life.

A prominent merchant, Patton is noted for having used his "social position and wealth" as a "power for the good in his section of the country." To increase commerce, he proposed and helped complete an east-west thoroughfare in Asheville. With the help of construction workers employed in his business, the road was finished and named Patton Avenue. From his father Patton inherited the Eagle Hotel, one of the first hotels in Asheville. He later expanded his resort interests and built another hotel in Warm Springs.

Patton donated the land on which Trinity Episcopal Church in Asheville now stands and helped open the church in 1841, serving on the first vestry. He was a member of Asheville's first board of commissioners (1841) and served as the presiding justice in the Buncombe County Court of Pleas and Quarter Sessions for many years.

Clara Walton of Burke County was his first wife by whom he had two sons, James Alfred and William Augustus; both died in the disease-ridden army camps of the Confederate army. Patton's second wife was Henrietta Kerr of Charleston, S.C., by whom he had two children, Fanny Louisa and Thomas Walton. Fanny was a founder of Mission Hospital in Asheville. Thomas Walton had a distinguished military career and held numerous political offices in Asheville, including that of mayor.

It is to the credit of James W. Patton and Charlotte Kerry, his sister-in-law from Charleston, that Beaucatcher Mountain has its characteristic name. Charlotte strolled on the mountain with her beaux, and her brother-in-law teased her, dubbing the mountain "Charlotte's Beaucatcher."

Virginia T. Lathrop, "A Century of Roots" (a paper presented to the Review Club.