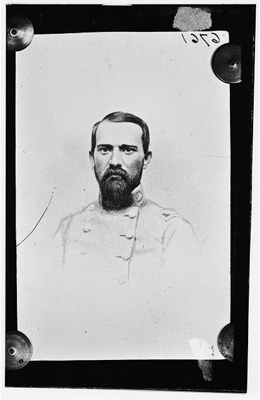 William Dorsey Pender, Confederate soldier, was born in that part of Edgecombe County that became Wilson County in 1855, the son of James and Sarah Routh Pender. He received his early education in the common schools of the county and worked as a clerk in his brother's store in Tarboro before receiving, at age sixteen, an appointment to the U.S. Military Academy. On his graduation from the academy in 1854, Pender stood nineteenth in a class of forty-six. He was first commissioned in the artillery, but in 1855 he secured a transfer to the First Dragoons and three years later was promoted to the rank of first lieutenant.

From 1856 to 1860 Pender saw service on the frontier in New Mexico, California, Oregon, and Washington Territory. During this tour of duty, on 3 Mar. 1859, he married Mary Francis Shepperd, the sister of a classmate at West Point and daughter of Congressman Augustine H. Shepperd of Good Spring, N.C. The couple had three children: Samuel Turner, William D., and Stephen Lee, the last born four months after Pender's death.

Prior to the outbreak of the Civil War (and the secession of North Carolina), Pender resigned his commission in the U.S. Army and offered his services to the Confederacy, with the rank of captain in the Provisional Army. After temporary duties as a recruiting officer in Maryland (Baltimore), and then as an instructor of recruits at Camp Mangum (Raleigh) in his native state, he was elected colonel of the Third North Carolina Regiment on 16 May 1861. On 15 August he was transferred to the Sixth North Carolina. Under his command this regiment fought well during the Peninsular Campaign of 1862. For brilliant leadership at the Battle of Seven Pines he was promoted to brigadier general and assigned to command a brigade in A. P. Hill's division.

Pender ably led his brigade in the Seven Days' fighting before Richmond, at Cedar Mountain, Second Manassas, Harper's Ferry, Sharpsburg, Fredericksburg, and Chancellorsville. He was wounded at least five times, but he never relinquished his command. On 27 May 1863 he was promoted to major general. Though only twenty-nine at the time, Pender was considered one of the ablest generals in the Army of Northern Virginia. At Gettysburg he commanded a division in Robert E. Lee's newly formed Third Corps. On the second day of the battle, however, he was severely wounded in the leg and had to be evacuated to Staunton, Va., where he died after the amputation of his shattered leg. General Lee wrote: "His promise and usefulness as an officer were only equaled by the purity of excellence of his private life." Like many soldiers in the Civil War, Pender underwent a profound religious conversion, and the men who served under him were greatly influenced by his example. His body was taken to North Carolina and buried in the yard of Calvary Church, Tarboro.

William W. Hassler, ed., The General to His Lady: The Civil War Letters of William Dorsey Pender to Fanny Pender (1965)

Martin Schenck, Up Came Hill: The Story of the Light Division and Its Leaders (1958)