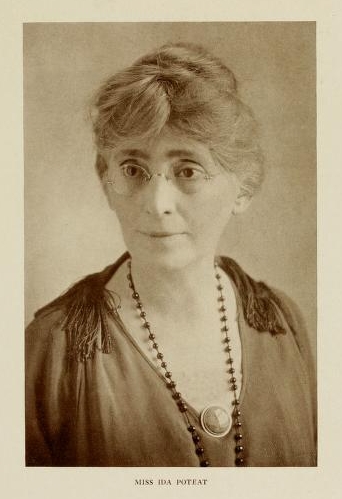 Ida Isabella Poteat, artist, teacher, craftsman, and patron of art, was born at Forest Home near Yanceyville in Caswell County, the daughter of James and Julia A. McNeill Poteat. She received early education locally and at the Raleigh Female Seminary, then studied at the New York School of Fine and Applied Arts, the Cooper Union Art School in New York, and the School of Applied Design in Philadelphia. In New York she was a private pupil of William M. Chase, president of the Society of American Artists. Among her other teachers were Robert Henri, Charles Parsons, and Louis Mounier.

For a time she was an art instructor at Oxford Seminary in Oxford, Granville County, but with the opening on 27 Sept. 1899 of the Baptist Female University in Raleigh (now Meredith College), she joined the faculty as professor of art, a position she held until her death more than forty years later. Ida Poteat taught and inspired hundreds of young people both as students at Meredith College and in private classes, one of whom was the artist Francis Speight. Of her, Speight wrote: "Not only did she encourage us to appreciate fine forms and colors, but she encouraged us also to see beauty in humble things."

In 1924 the faculty at Meredith College established a lasting tradition of presenting a stage production of "Alice in Wonderland" every four years. Much to the delight of students and the public, the faculty played leading roles. Ida Poteat designed the costumes and made fantastic masks. Of a more serious nature, she also had designed the seal adopted by the college in 1909.

A devout Baptist, she was the sister of William Louis and E. McNeill Poteat. A portrait of her hangs in Poteat Hall on the Meredith campus. She was buried in the family cemetery near Yanceyville.