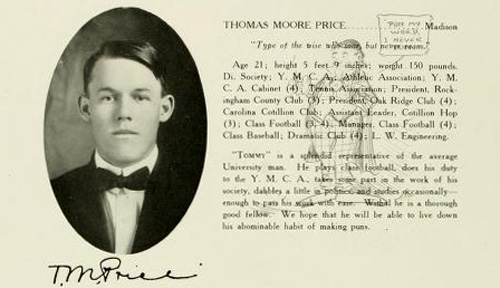 Thomas Moore Price, engineer, was born in Madison, the son of James Valentine and Pattie Frances Moore Price. He was graduated at Oak Ridge Military Institute at age seventeen and entered The University of North Carolina, where he was awarded the A.B. degree in 1912. After a year as principal of the high school at Rockford in Surry County, he returned to Chapel Hill and received the B.S. degree in civil engineering in 1915. His first employment was with a paving contractor in Greensboro, and after a year he became manager of two quarries operated by the Raleigh Granite Company. During World War I he tried a number of times to enlist but was always rejected for health reasons. In the spring of 1919 Price left Raleigh for the West Coast, where he was employed by Henry Kaiser, a paving contractor.

Over a period of years Price was engaged in paving many miles of highway along the West Coast, particularly in southern California. Kaiser sent Price to Seattle to design and build what proved to be the first of more than a hundred gravel and sand plants that he designed. Among those with which he was associated were the Radum Plant near San Francisco and the Boulder, Bonneville, and Coulee Dam plants. The first of these was noted as producing 1,800 tons or 36 railroad cars hourly. As Kaiser's work expanded, he called upon Price to construct still larger and more productive sand and gravel plants. By studying the geology of an area, Price was able to locate productive sites. His work at Boulder Dam won national recognition and was completed two years ahead of schedule. Some of his work was described in an article he contributed to volume 109 of the Transactions of the American Institute of Mechanical Engineers.

Price, accompanied by his brother, Wright, visited Venezuela in the spring of 1944 as a guest of the Venezuelan government. In the 1950s he went to New South Wales, Australia, to assist in the construction of the Snowy Mountain hydroelectric project and there developed a deep appreciation for the people and they for him. Price's contribution is recognized in the subsequent development by the Hamersley Iron Party, Limited, where a mountain in northwestern Australia, estimated to hold 500 million tons of iron ore, has been named Mount Tom Price. A coastal town, 182 miles north, to provide housing for works and shipping facilities was also named Tom Price.

In 1922 Price married Alice Bone of Red Bluff, Calif. They became the parents of a daughter, Shirley. When he lived in Raleigh, Price sang in the choir of the Episcopal Church of the Good Shepherd, and he was married in an Episcopal church. In his early life in Rockingham County, however, he attended the Presbyterian church. He was a devoted church worker, played the pipe organ, was president of the Oakland Symphony, and supported a school for boys in southern California. Throughout his life he retained an interest in North Carolina, following events in Chapel Hill and aiding in the rebuilding of the Presbyterian church in Wentworth.