John Reed, gold miner, businessman, farmer, and soldier, was born in Germany, most likely in the province of Hesse-Cassel. Nothing is known of his family, childhood, or youth.

He landed at Long Island in 1778 or 1779 as a Hessian soldier hired by George III of England to squelch the rebellion of his American colonies. Precise data on Reed's service are lacking, but it is commonly agreed that he deserted his unit somewhere in South Carolina or Georgia. Like many of his fellow mercenaries, he might well have left the king's service at Charleston, been captured and whipped, and subsequently been banished from his unit. In any case, John Reed and several other Hessians made their way either singly or in groups to the rural Germanic area around Dutch Buffalo Creek in eastern Mecklenburg (now Cabarrus) County. There, in an isolated, ethnic farm community built around St. John's Lutheran Church lived numerous German farmers.

In this setting Reed was to spend his life and raise a family. He married Sarah Kizer and reared three sons and five daughters. Reed was characterized by local historians as "honest but unlearned" and "a rather primitive character, but a good liver in his way and a respected citizen." He performed his share of civic duties and became a successful farmer and small businessman. 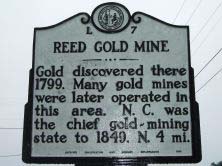 In 1799, by which time Reed already had passed his fortieth year and acquired several hundred acres of land, the course of his life and a portion of the history of his adopted homeland were turned about by the accidental discovery of gold on his property. One Sunday his twelve-year-old son, Conrad, chose to go fishing in Little Meadow Creek on the family farm rather than attend church with his parents. Conrad retrieved a yellow object, which proved to be metallic, from the water. The wedge-shaped rock was about the size of a small flatiron and apparently weighed about seventeen pounds. No one in the immediate family could identify the stone, and it served as a doorstop in their home for three years.

In 1802 Reed took the rock to Fayetteville on a marketing trip, and a jeweler there identified the metal as gold. Still curiously unaware of its value, the farmer sold his find for what he felt to be a "big price," $3.50. The unknown merchant gladly paid him.

It was not long before Reed discovered his ignorance, and he and his family began searching in Little Meadow Creek for more gold. He early turned a profit and in 1803 expanded his operation by taking three local men—his brother-in-law Frederick Kizer, the Reverend James Love, and wealthy landowner Martin Phifer, Jr.—into partnership. After crops were planted and the stream dried up in late summer, each of the three supplied equipment and two slaves to dig for gold in the creek bed. Before the end of the season Peter, one of the slaves, unearthed a 28-pound nugget.

For the next twenty years, operations at Reed's placer mine, and increasingly at similar sites across several adjacent counties, continued on a crude, part-time basis, perhaps because mining was an unfamiliar pursuit with sporadic rewards for the simple agrarians. Reed's diggings became commonly known as the "bull of the gold mines" and continued as the principal mine in the state and nation. After gathering up obvious surface particles of gold, the workers had progressed to pits, pans, and later rockers. By 1824 haphazard digging at the spot had yielded an estimated $100,000 in gold.

Meanwhile, the decade after 1825 saw a rapid expansion of the hitherto small North Carolina mining industry. With the discovery of gold in underground veins, mining began in earnest, centered about Charlotte. Reed's mine remained, however, essentially a family operation and was to be a part of neither the most advanced technology nor, perhaps, the frenzied excitement of the time. The old German apparently preferred to continue his profitable placer operations rather than risk his capital in the uncertainty of a shift to extensive, costly vein mining. In addition, perhaps reticent about his background, he opted to retain the close-knit family pattern of the venture. Alluring nuggets of remarkable size, for which the site was famous, occasionally turned up, and before 1826 the total recorded amount of gold found there in pieces exceeding one pound reached 84 pounds.

During the 1830s work at Reed's mine finally progressed from placer mining to hard-rock underground efforts. In 1831 Isaac Craton dug the first pit on a hill above Little Meadow Creek. Although lacking technical expertise, the miners seemingly made considerable progress in excavation within a few years and sank at least four or five shafts with depths of up to 90 feet. The laborers processed the ore in rockers after extracting and crushing it.

In November 1834 one of the pits yielded a chunk of gold that weighed nearly 10 pounds when fluxed and precipitated a lengthy legal struggle among members of Reed's family. The case reached the state supreme court a decade later. Formal work at the mine was said to have ceased during the entire time because of an injunction. The dispute was over which of Reed's sons and sons-in-law owned portions of the nugget.

Shortly after issue was settled, John Reed, who had finally become a naturalized citizen in 1842, died at age eighty-eight. His estate, including 745 acres of land and eighteen slaves, was valued a few years later at some $40,000. According to a local newspaper, the deceased immigrant had been "a good citizen, a kind parent and neighbor, and a helper of the poor."

A son-in-law and a grandson purchased the mine at the sale of Reed's estate and operated it on a marginal budget for several years. Various parties subsequently operated the mine intermittently until about 1910. The property then lay dormant until acquired as a State Historic Site by North Carolina in the 1970s.

There are no known manuscripts or portraits of Reed, whose grave remains secluded near Little Meadow Creek.

Richard F. Knapp, Golden Promise in the Piedmont: The Story of John Reed's Mine (1975).

August Partz, "Examinations and Explorations of the Gold-Bearing Belts of the Atlantic States: The Reid Mines, North Carolina," Mining Magazine 3 (1854).