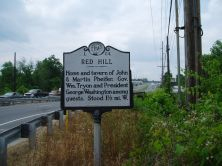 Martin Phifer, Jr., planter, soldier, millwright, and huntsman, was born at his father's plantation, Cold Water, which at that time was located in Anson County but after 1762 in Mecklenburg and after 1792 in Cabarrus County. He was the third son of Martin Phifer, who had recently migrated from Pennsylvania, and his wife, Margaret Blackwelder Phifer, a lady of German descent. Young Phifer was educated at the same school with his two older brothers, John and Caleb.

On 15 Apr. 1776, by act of the Fourth Provincial Congress, he was appointed to the rank of captain and "ordered by the State of North Carolina to raise the second troop of light Dragoons." Three such companies of light horse were authorized, although they were not mentioned in the resolves from the Continental Congress. After raising the troop he marched it to Charleston but arrived two or three days after the British attack on Sullivans Island (28 June 1776). Some months later his troop (Independent Company of North Carolina Light Horse in Continental Service) was transferred to the northern army. It remained there until the spring of 1778, when it was discharged by the Board of War for lack of horses, equipment, and provisions. (Captain Phifer's appointment is listed as extending from March 1777 to April 1780, but these dates do not coincide with his pension deposition of 1832.)

From his father Phifer inherited Cold Water plantation and two-thirds of a tract of land on Mecklin's Fork and Lyle's Creek in present Catawba County. He also received military land warrants for 1,149 acres in present Tennessee and purchased two large grants (2,373 acres and 5,000 acres) in the "Middle District" (probably present Bedford County) of that present state. In addition to farming, he operated successfully as a millwright, "being regarded as the most skillful in that trade of anyone in that country." In politics he was an anti-Jacksonian and in religion he was a Protestant of the Lutheran denomination. He did, it is interesting to note, maintain a friendly relationship with the Swiss Moravians at Salem since he is known to have visited them at least once (23 July 1778).

"In personal appearance," says one biographer, "Martin had much to be admired. He was six feet in height, of great strength and vigor . . . and was considered the best looking of his father's children and the handsomest man in all that part of the country. Of his domestic character, frugality was not a part of it, and on the reception of his friends, his house was open to all." When President George Washington toured the South in the spring and early summer of 1791, he lodged on the night of 29 May at Major Martin Phifer's residence, an estimated twenty-two miles from Charlotte on the road to Salisbury.

On 5 Nov. 1778 he married Elizabeth Locke (1758–91), daughter of General Matthew Locke of Rowan County. The children of this marriage were John, George, Mary, Margaret, and Ann. When Captain Phifer's brother John died suddenly in 1778, Martin moved from his father's house at Cold Water to Red Hill, his brother's home on the old road from Salisbury to Charlotte, about three miles west of Concord off the present Poplar Tent road, in order to care for John's family. When his father became infirm, he moved back to Cold Water and remained there for many years after his father's death. In his last years he lived with his son John at the Black Jacks, a plantation adjoining Red Hill, where he died at 9:00 A.M. According to Society of Cincinnati records, Martin Phifer, Jr., was the last surviving officer of the North Carolina Continental Line.

Francis B. Heitman, Historical Register of Officers of the Continental Army during the War of the Revolution (1893). https://archive.org/details/franheitmanreg00bernrich (accessed July 1, 2014).