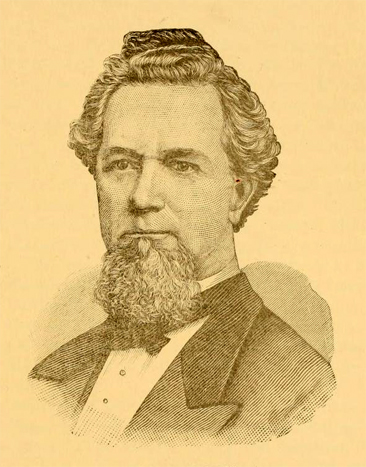 William Henry Rhodes, pioneer writer of science fiction, poet, lawyer, and judge, was born in Windsor, Bertie County, the oldest son of Elisha Averitt Rhodes, a lawyer who also served as clerk of court and master in equity for the county and was a consular officer to the Republic of Texas, and his wife, the former Ann Maria Jacocks. His mother died when William was six. His half brother, Lieutenant Edward A. Rhodes, distinguished himself as a member of the Eleventh North Carolina Regiment at Gettysburg, where he was killed in action. (A stepbrother may have been a Union soldier, killed with William T. Sherman's troops in Georgia; one of Rhodes's poems refers to him as John, his stepmother's favorite, but this name does not appear in a list of her children, and he may have been only a figment of the poet's imagination.)

The Rhodes family was wealthy and prominent in the community, and young Rhodes attended the Bertie Union Academy at Woodville, then under the supervision of the Reverend Andrew M. Craig. He is said to have gone to the College of New Jersey at Princeton but returned home after a very short time—perhaps even before formally enrolling—when his father was appointed U.S. consul to the Republic of Texas stationed in Galveston. Accompanying his father as secretary, young Rhodes participated in various literary and debating clubs in Galveston until 1844, when he enrolled at Harvard to study law, perhaps to please his father more than to satisfy his own interests. He spent much of his time at college reading literature.

Following his graduation in 1846, Rhodes returned to Galveston to practice law. He served one term as a probate judge before moving to New York for a short time. He then returned to his native town, Windsor. Sometime between 1847 and 1849 he married Mary Eliza Driggs, his stepsister, and they became the parents of two daughters who died young. His wife died in 1851. In Windsor and later in Galveston he practiced law until 1850 before setting out by sea for California, to which he was lured by news of the gold rush and because his father and stepmother were living there. In San Francisco he practiced law and was active with the 1856 Vigilance Committee, a body of men who attempted to keep order during a period of weak city government following the gold rush. His humor and gentle manners easily won him many friends, and for about six months in 1856 he was coeditor with Washington Bartlett (later governor of California) and Bartlett's brother of the Daily True Californian. On 29 Dec. 1859, in Oroville, Calif., he married Susan McDermott of Crewkerne, Somerset, England, and they became the parents of six children: Arthur Pym, William, Jr., Raleigh Elisha, John, Susan, and Mary.

While at Harvard, or perhaps even earlier, Rhodes began to write poetry and essays. Among the first to be published were some poems in the Southern Literary Messenger. It was at Harvard that he completed The Indian Gallows and Other Poems, published in book form in 1846. This narrative poem, inspired by two trees in Bertie County that had grown together some eighteen feet above ground, concerns the Tuscarora Indian tradition of their origin. Also included in the book is a poem in blank verse about Theodosia Burr, who, according to tradition, was forced by pirates to "walk the plank" off the coast of North Carolina.

Rhodes continued to write for periodicals and newspapers wherever he lived for the rest of his life. Much of his work appeared anonymously or under the pseudonym Caxton, and it has never all been collected. In San Francisco he joined the Bohemian Club, and many of his poems, composed for the monthly gathering of its members, apparently were never published. His manuscripts were lost in a fire following an earthquake some years after his death. Among the journals to which he contributed were the Golden Era, Pioneer, Hesperian, and Daily True Californian. His essays, editorial comments, and other contributions appeared in the San Francisco Bulletin and were picked up by other newspapers across the country.

Although his poems were most numerous, Rhodes's primary literary contribution was of the type later recognized as science fiction. At the time his pieces were written, however, they were presented as factual accounts of unusual happenings. His most noted contribution appeared in the Sacramento Union on 13 May 1871 and was signed only with his initials. Afterwards it was published in book form as The Case of Summerfield. It told of a man who discovered a substance to break down water into its component parts which would then burst into flames, and who threatened to destroy the world by setting the oceans afire unless he was paid a large amount of money. The reaction of those who read this story in 1878 has been described as similar to the reaction in New Jersey in 1938 following the radio broadcast of Orson Welles's "The War of the Worlds." Even though another newspaper had recently exposed the original story as a hoax, Rhodes followed this with a sequel, "The Summerfield Case Again." Rhodes was soon recognized as the author, and a host of admirers asked for still more stories. From time to time some of them have been reprinted and late-twentieth-century science fiction periodicals found them still to be intriguing. Others were "The Aztec Princess," "The Earth's Hot Center," "Phases in the Life of John Pollexfen," and "The Telescope Eye."

It had long been Rhodes's ambition to collect some of his writings for publication as a book, but he never seemed to find the time. This was the case in spite of the fact that his friends often commented that he devoted only about one day a week to his legal practice (thereby earning only a limited income for his family) and the remainder of his time he spent in writing. Rhodes, in fact, was said to have been supported by his father at least until he was twenty-seven and on many occasions thereafter to have spent on himself family funds entrusted to him for other purposes.

In 1876, following his death, some friends collected what they regarded as the best of his compositions and published them in a volume entitled Caxton's Book: A Collection of Essays, Poems, Tales, and Sketches. Royalties from its sale were added to his family's modest inheritance.

On a dark night early in April 1876 Rhodes and his wife were awakened by a burglar in their bedroom. Several children were asleep in an adjoining room. Rhodes attempted to capture the burglar, a fight ensued, members of the family rushed around terrified and screaming in the dark, and the burglar's knife slashed and cut Rhodes severely. This encounter was said to have left him "bereft of reason" and he died shortly afterwards.

Dixon, Samuel Houston. The poets and poetry of Texas. Biographical sketches of the poets of Texas, with selections from their writings, containing reviews both personal and critical. Austin, TX: S. H. Dixon & Co. 1885. 246-247. https://archive.org/details/poetspoetryoftex00dixo (accessed May 21, 2014).