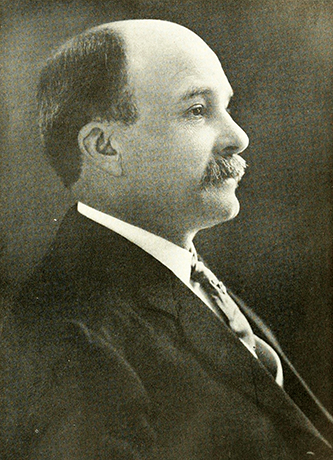 Lunsford Richardson, pharmacist and founder of the Vick Chemical Company, grew up on a plantation in Johnston County southeast of Raleigh. His father, Lunsford Richardson, Sr., died before he was two, and his mother, Laurinda Vinson, daughter of Archibald and Rutha Smith Vinson, took over the operation of the plantation and raising of the five children. Lunsford was the youngest child and his closest companions were slaves on the plantation. His two older brothers, who had joined the Confederate army, were away when, in April 1865, the home and farm were looted by passing troops from William T. Sherman's army. At age fourteen he went off to the Horner and Graves School in Oxford and then in the fall of 1872 enrolled at Davidson College. His mother died in January 1873 and Richardson, short of money, completed the four-year curriculum in three years, graduating in May 1875 as salutatorian of his class and winner of the Greek and Latin medals and the Debater's Medal of the Philanthropic Literary Society.

For four years he was principal of the Little River Academy in Lyndon, but finding prospect for economic advancement poor, he left teaching in 1880 and with his savings purchased a drugstore in Selma. Four years later he married Mary Lynn Smith, daughter of the Reverend Jacob Henry Smith, minister of the First Presbyterian Church of Greensboro. His wife's brother, Henry Louis Smith, later president of Davidson and of Washington and Lee, was best man. In 1890 Richardson moved his family to Greensboro, where, with John B. Fariss as partner, he established the Richardson-Fariss Drug Store, which became the town's largest. In 1898 he dissolved his partnership and formed the L. Richardson Drug Company, one of four wholesale drug companies in the state. Richardson had developed many pharmaceutical preparations, and his new company was formed as a means of selling them to a wider market; but he soon found that his stockholders were more interested in dividends than in using funds to promote his products. Consequently, in 1905, at age fifty, he left the wholesale business and with $8,000 capital launched the wholly owned Vick Family Remedies Company. The Vick name was used because it was short, "catchy," and easy to remember. Richardson had seen it in an advertisement for "Vicks Seeds" but may have also wanted to honor his brother-in-law, Dr. Joshua W. Vick of Selma.

His Vick Family Remedies were manufactured in the back half of a building on South Davie Street. In the front half, he had the distributorship for Pepsi Cola to provide funds while a market developed for his Vick preparations. By 1910 he was able to drop the Pepsi franchise and build a two-story brick building on Milton Street for the manufacture of his Vick products. His most successful preparation was Vicks VapoRub, a medicated salve for colds first developed in 1894. When spread on the chest, it acted like a mustard plaster and vaporization of the salve by the body's heat allowed its vapors to be inhaled, making breathing easier. Once tried, the product largely sold itself and eventually all efforts were concentrated on VapoRub alone. Aided by the distribution of free samples, it expanded into seven southeastern states and in 1913 was first introduced in the North. Sales climbed from $25,000 in 1907 to nearly $150,000 in 1913 and to over $600,000 in 1917. The great influenza epidemic of 1918–19 sent sales soaring to nearly $3 million and made Vicks a household name throughout the United States. At the beginning of 1919 the business was incorporated as the Vick Chemical Company.

Having experienced the South's poverty after the Civil War, Richardson had determined to use all of his efforts to help his state prosper once again. He dreamed of establishing a worldwide business but did not live to see this happen, for he died of pneumonia while on a trip to San Francisco—another victim of the influenza epidemic. Though the business he founded (renamed Richardson-Merrell, Inc.) has since grown manyfold and today markets thousands of different products, Richardson's original preparation, VapoRub, still remains a major company product, and millions of the little blue jars are sold annually throughout the world.

Portraits of Richardson in possession of the family show him to have been of medium build with dark brown eyes and hair. A thoughtful, kind, unselfish man, and an elder in the First Presbyterian Church of Greensboro, he took his Christian commitment seriously, always finding time to help others. Every Sunday for over twenty years he taught adult Bible classes in his church in the morning and in the Negro community in the afternoon. His special interests were the problems of the blacks, help to any who sought an education, and the benevolent causes of his church, to which he left a large portion of his Vick stock. Over twenty years after his death, during World War II, blacks in Greensboro petitioned that a Liberty ship be named for this "white friend" whose "splendid example did so much to bring about a better understanding of the races." Richardson loved poetry and found relaxation in reading Vergil in the original Latin. Surviving him were his wife and five children: J. Henry Smith, Laurinda Vinson Carlson, Mary Norris Preyer, Lunsford, and Janet Lynn Chapin Prickett. He was buried in Greensboro's Green Hill Cemetery.