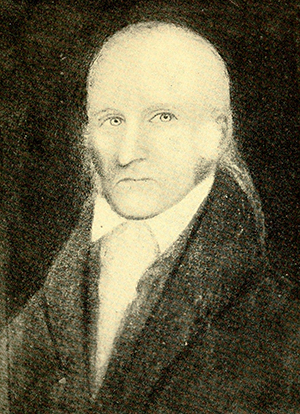 John Robinson, clergyman and teacher, was born in Mecklenburg County near Charlotte, the son of David and Mary Hayes Robinson, of English and French descent. His grandfather, Andrew Robinson, settled in Lancaster County, Pa., in the early 1700s, and his father moved to North Carolina in 1750. Young Robinson's education was directed by Dr. Thomas Henderson of Charlotte and the Reverend Robert Archibald of the Poplar Tent Academy in Cabarrus County. He completed his classical education at Mount Zion College in Winnsboro, S.C., from which he received the A.B. degree. The University of North Carolina awarded him a master's degree in 1810 and a doctor of divinity degree in 1829.

On 4 Apr. 1793 he was licensed to preach by the Orange Presbytery. His first assignment was in Duplin County. In 1736 the Reverend Hugh McAden had organized a church in the Grove Pond area, but it had been without a pastor for some years. Robinson bought a home and remained there for five years. In 1800 he accepted an invitation from the Presbyterians in Fayetteville, and soon after his arrival he began to organize a church. The six elders elected were Robert Donaldson, Duncan McLeran, David Anderson, Duncan McAuslin, Archibald Campbell, and Colonel John Dickson. On 6 Sept. 1801 the ordinance of the Lord's Supper was administered for the first time in Fayetteville. "There were seventeen members, but there were one hundred and fifty who sat down to the table." In addition to his pastoral duties, Robinson was principal of the Fayetteville Academy. The combined salary for the year was one thousand dollars. He found the double duty too much for his strength, and in December 1801 he resigned.

Robinson went to Poplar Tent Church in Cabarrus County where he became pastor and teacher. In 1803 he was "induced by earnest solicitations of the citizens of Fayetteville to return," yet not until 1805 did he actually take up the pastoral duties and the classical school there. His second ministry lasted until 1808, when he resigned again for the same reason. Returning to Poplar Tent, he remained at the church until 1841, when he resigned his pastorate due to age and infirmity. For many years Robinson also was president of the board of trustees of Davidson College.

Resolutions adopted by the people of Fayetteville at the time of his death reflect the stability of the Presbyterian congregation as well as the lasting impression Robinson's labors made on the community. A tablet hangs in the vestibule of the church and his portrait is in the historical room. A marble slab erected by his pupils marks his grave in the cemetery at Poplar Tent.

On 9 Apr. 1795 Robinson married Mary Baldwin, the stepdaughter of his old teacher, Dr. Henderson. She died in 1836; four of their children, two sons and two daughters, reached maturity.