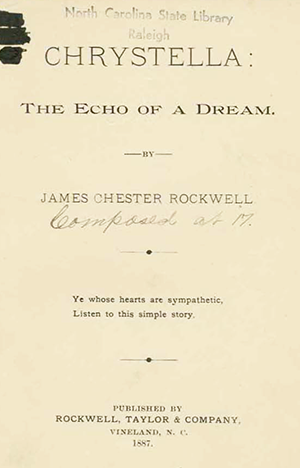 James Chester Rockwell, poet, editor, and minister, whose early death at age twenty-five was believed to have deprived North Carolina of one of its most promising literary figures of the late nineteenth century, was born in Whiteville, the son of Henry Clay and Sallie J. Powell Rockwell. He attended the academy of Professor W. G. Quackenbush in Laurinburg but otherwise was self-educated from extensive reading. Regarded as a child prodigy, he had his essays and poetry published in southern and other periodicals.

His father served in the Confederate army as a captain with the Fifty-first North Carolina Regiment in the early coastal battles and later in Clingman's Brigade. When he died on 24 Feb. 1874, his son James Chester was only six. As a boy James was encouraged in his literary interests by the distinguished South Carolina poet, Paul Hamilton Hayne, of Charleston, who bought Rockwell's first poem, written at age eleven. Hayne published it in the Augusta, Ga., Chronicle, which he then edited, paying for it at the rate of eleven cents a line. A little later the lad startled Carolina literary circles by writing in his sixteenth year the substantial poem—of extraordinary length for a teenager—"Chrystella: The Echo of a Dream," which contained much mature thought and expression as well as passages of poetic grace. It appeared in pamphlet form in 1887. When Eugene C. Brooks published the anthology, North Carolina Poems, in 1912, he included a biographical sketch of Rockwell together with a selection of his poems. Four lines from Rockwell appeared as a foreword to the book:

The young poet labored indefatigably with a magazine he acquired in 1885 entitled The Belles-Lettres, published at Raleigh, but the post–Civil War poverty of the South made a journal of pure literature, issued twice a month at one dollar a year, impractical. Editors and reviewers lauded the magazine, but it ultimately folded. Rockwell had made it the outlet for much of his own writing; still its demise did not cause him to drop his pen. He arranged for the subscriptions to be filled by another publication so that no one lost by supporting him. His poems, essays, and book reviews shortly appeared in a new journal, the State Chronicle, launched in Raleigh by Walter Hines Page and Edward A. Oldham. Rockwell began to win acceptance for his verse and essays in northern publications.

Grief over the loss of his favorite brother, William, who had sponsored and supported him in his education and writing efforts, caused his health to decline. He spent the summer of 1886 at Old Fort, at that time a flourishing resort at the eastern foot of the Blue Ridge. There he came under the inspiration of a militant Baptist minister, the Reverend C. M. Murchison. Rockwell had been reared a Presbyterian, but under Murchison's influence he was converted to the Baptist faith and induced to enter the ministry. He enrolled in the Southern Theological Seminary at Louisville, Ky. While engaged in studies there he went to South Carolina and at Nichols, in Marion County, he married Loula Ayres at her family home, Beachwood, on 29 Feb. 1888. There their first son, Paul Ayres, was born on 3 Feb. 1889.

Rockwell's health did not permit him to complete his studies in Louisville. Being advised to settle in the mountains, he took an assignment in 1889 at the Baptist church in Waynesville but later in the year transferred to Morristown, Tenn. He soon found the climate there to be unsuitable and accepted a call to the First Baptist Church in Newport, Tenn., where his second son, Kiffin Yates, and daughter, Agnes, were born.

Rockwell died in Newport of typhoid fever and was buried in Morristown. He was known as a preacher of great forensic power, and his first sermon in Waynesville, the Waynesville Courier reported, left the congregation "spellbound." He was tall, wore a black beard, and, according to former governor Ben W. Hooper of Tennessee, "looked somewhat like my conception of one of the Twelve Apostles."

A sketch of his life by his wife is in the Weeks manuscript bibliography, North Carolina Collection.