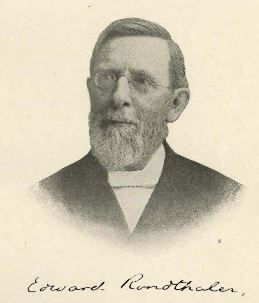 Edward Rondthaler, Moravian bishop, pastor, administrator, teacher, historian, editor, writer, linguist, and community leader, was born at Schoeneck, Northampton County, Pa., in the parsonage of Schoeneck Moravian Church, which his father, Edward Rondthaler, Sr., served as pastor from 1841 to 1844. His mother, the former Sarah Louisa Rice of Bethlehem, Pa., was the granddaughter of John Heckewelder, missionary to the North American Indians, whose father, George, had emigrated from Moravia to Saxony in the 1720s, and of Owen Rice, a Welshman who was minister of the Moravian church in Philadelphia. She bore three children, Edward, Jr., Mary, and Howard, and died at Nazareth, Pa., in 1854.

The first Rondthaler of record, being Protestant, was exiled from Salzburg, Austria, to Prussia around 1731. Edward Rondthaler's great-grandfather, Albert Rondthaler, was a Lutheran pastor in Pomerania. His grandfather, Emmanuel Rondthaler, was born there in 1764 but grew up in a Moravian congregation (Neusalz) in Silesia, served the Moravian church at Sarepta, Russia, for ten years, and, having been ordained at Sarepta, returned to Germany. Sent to America, he became pastor in 1808 of the Moravian church at York, Pa., and in 1819 of the Moravian church at Nazareth, where he died in 1847. His father, Edward Rondthaler, Sr., born in 1817 at York and educated at Nazareth Hall, a Moravian boys' boarding school, and Moravian Theological Seminary, then also in Nazareth, was a pastor and teacher, author and linguist, principal of Nazareth Hall, and afterwards professor in the theological seminary until his death in 1855.

Edward Rondthaler, Jr., entered Nazareth Hall in 1853 and Moravian College and Theological Seminary in 1856. At the seminary, which was relocated in Bethlehem in 1858, he studied biblical and classical languages, biblical exegesis, dogmatics, mathematics, history, and classical literature; he was graduated in 1862. Nine months of graduate study at the University of Erlangen, Germany, were followed by a walking tour of Germany, with visits to Switzerland and Italy. After teaching for a year at Nazareth Hall, he received a call to the Moravian church in Brooklyn, N.Y. Ordained a deacon at Central Church in Bethlehem in 1865, he was raised to the rank of presbyter at a synod in Bethlehem in 1868.

On 1 Oct. 1867 Rondthaler (no longer known as Jr.) was married in Bethlehem to Mary Elizabeth Jacobson, daughter of Bishop and Mrs. John Christian Jacobson. To their union, which lasted sixty-three years and four months, were born six children: Alice, on 27 July 1868, and Howard Edward, on 17 July 1871, both in Brooklyn; a second daughter, who lived only five months, in Salem; and three children who died in infancy and were buried in Bethlehem. 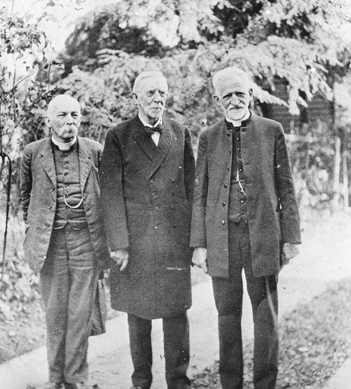 While pastor in Brooklyn, Rondthaler directed rebuilding of the church and parsonage, which had been destroyed by fire, and contributed to The Independent, a magazine of news and opinion. Called to the First Moravian Church in Philadelphia in 1874, he earnestly appealed to his congregation for its full dedication to Christ, while strengthening his own belief in the crucifixion and resurrection of Jesus Christ as the cardinal doctrines of the Christian faith.

In 1877 he became pastor of the Salem Moravian congregation, arriving on 19 October to occupy the brick parsonage on South Church Street—constructed in 1841 by his wife's father, as principal of Salem Female Academy—where he lived until his death. In addition to his pastorate at Home Moravian Church he became, in 1884, the tenth principal of Salem Female Academy; he served for four years, continuing thereafter to teach the courses in biblical literature. First elected to the Provincial Elders' Conference (governing board) of the Southern Province in 1880, he held office until 1929, serving as president from 1891. In this capacity he not only presided over the triennial synods and went as fraternal delegate to the Northern Province synods but also attended the decennial assemblies of the General Synod of the worldwide Moravian church (Unity of the Brethren) held in Herrnhut, Germany, in 1879, 1889, 1899, 1909, and 1914, with the journey in 1889 including travel to the Holy Land. As president of the Provincial Elders' Conference he was ex officio chairman of several boards, including that of Salem Academy and Salem College, and a member of the Moravian College and Theological Seminary Board of Trustees. Chairman of the Salem Boys' School Board of Directors, he also taught Bible courses at the school.

Elected bishop, Edward Rondthaler was elevated to the episcopacy of the Moravian church on 12 Apr. 1891. Only the second bishop ever consecrated in Salem, he was the senior Episcopus Fratrum in the world at the time of his death. After founding The Wachovia Moravian in 1893, he continued as the Provincial monthly's editor until his death, except for a five-year period.

In 1908 Bishop Rondthaler relinquished his duties as pastor of Home Church to devote more time to the development of the Salem congregation, of which he remained head pastor, and the Southern Province as a whole. Through 1930 he conducted the Easter Sunrise Service at the Salem Moravian graveyard and prepared the annual memorabile of the Salem congregation. The Memorabilia of Fifty Years, 1877 to 1927 appeared in 1928; those of 1928, 1929, and 1930 were published in a separate volume. Aside from biblical studies, history, especially Moravian history, was Rondthaler's favorite subject; he presented before the Wachovia Historical Society papers on "The Life of Bishop August Gottlieb Spangenberg" and "The Use of the Lot in the Moravian Church." Also a linguist, he was not only fluent in English and German but also read Hebrew, Greek, and Latin. Conversant in one or more romance languages, he began to study Spanish at about age eighty.

In 1880 The University of North Carolina conferred upon him a doctor of divinity degree. So distinguished was his career of service and scholarship, and so keen his insight into local, state, national, and international affairs, that the university summoned him to Chapel Hill again in 1918 to award him a doctor of laws degree.

In 1930 the Winston-Salem Chamber of Commerce named Rondthaler the city's Outstanding Citizen and awarded him its Service Cup for "meritorious, unselfish and distinguished community service." The cup, filled with white flowers, stood beside his casket until the funeral service at Home Church on 2 Feb. 1931, the day of his burial in a reserved space in the first lot ever used in God's Acre, the Salem Moravian graveyard.

In 1913 the Rondthaler Memorial Building of Home Church was named in his honor, and in 1949 Moravian Theological Seminary established the Bishop Edward Rondthaler Chair of Practical Theology in memory of the life and work of this compassionate, learned, and saintly servant of God.

"This portrait is titled, “Moravian Bishops.” Bishop Edward Rondthaler (1842-1931) is at the center. The other two men are not identified. Bishop Edward Rondthaler took over the pastorate of the Salem Moravian congregation in 1877. He was named a bishop in 1891." Courtesy of Digital Forsyth. Available from http://www.digitalforsyth.org/photos/12880 (accessed June 5, 2013).