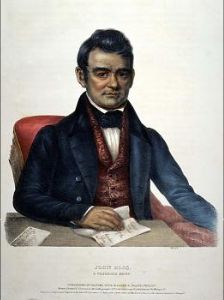 See also: Cherokee Indians - Part 5: Trail of Tears and the creation of the Eastern Band of Cherokees

John Ross, friend and leader of the Cherokee Indians, was born in Cherokee country near Lookout Mountain in an area that was relinquished by North Carolina to the federal government in the same year. He was the son of David, a Scottish Loyalist, and Mary McDonald Ross, one of whose grandparents had been a Cherokee. His earliest training was under a tutor at home, after which he studied briefly at Kingston Academy in Tennessee.

When just nineteen he was sent by the federal government on a mission to the Cherokee who had moved across the Mississippi River to the part of the Louisiana Purchase that later became Arkansas, where some Cherokee Indians had moved. As an officer with the Cherokee regiment at the Battle of Horseshoe Bend, Ross fought under Andrew Jackson. He became a member of the national council of the Cherokee in 1817 and served as its president from 1819 to 1826. Having helped draft the Cherokee constitution, he was elected assistant chief in 1827. The following year he became principal chief of the eastern band.

An active opponent of the removal of the Cherokee from the fertile land of their eastern home to a territory across the Mississippi, he was often in Washington, D.C., on their behalf. When all efforts failed and the federal government forced the Cherokee to move to what became Oklahoma, it was Ross who reluctantly led them. In 1835–37, at the time of the removal, his daughter Sophia attended the Salem Female Academy conducted by the Moravians at Wachovia. Ross was interested in the Moravian mission to the Cherokee and frequently visited Wachovia as he traveled between the Indian Territory and Washington.

In Oklahoma the eastern and western bands were united in 1839 under a constitution that Ross helped draw up, and he was chosen chief, a role he held for the remainder of his life. During the Civil War he attempted to keep the Cherokee neutral, but when he was unsuccessful they signed a treaty of alliance with the Confederacy. Some actively supported the Confederacy, but Ross's sentiments favored the North. After Federal troops invaded the Territory in 1862, he moved to Philadelphia.

Ross, whose Cherokee name was Cooweescoowe or Kooweskowe, was married in 1813 to Quatie, a Cherokee, who died on the tragic Trail of Tears en route to the Indian Territory. In 1845 he married a white woman, Mary Bryan Stapler, who died in 1865. At the time of his death Ross was in Washington to assist in drawing up a treaty for his people.