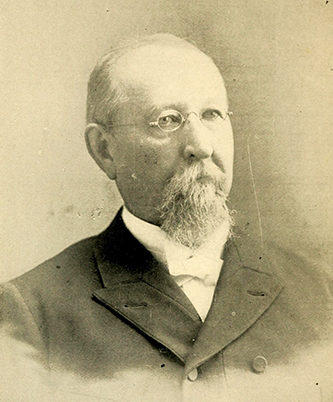 Jethro Rumple, Presbyterian minister, historian, and "father" of the Presbyterian Home for Children, was born in Cabarrus County, the son of Mary Winecoff Rumple and David Thomas Houston. He was reared by his oldest brother and his wife, Levi and Christina Rumple. When told of the circumstances of his birth, he chose to use the Rumple name. His maternal grandfather refused to allow his mother, who was a widow, to remarry. Young Rumple received his early education in the local old fields schools, then enrolled in the academy in the Poplar Tent community. He entered the sophomore class at Davidson College in 1847 and was graduated in 1850 as the second honor man; he used the inheritance from his father to finance his education.

After teaching school in North Carolina and South Carolina for several years, Rumple began the study of theology privately under the Reverend Walter W. Pharr, pastor of the Poplar Tent Presbyterian Church. In 1854 he entered Columbia Theological Seminary, where he remained for two years. On 31 July 1856 he was licensed to preach by the Presbytery of Concord and, upon receiving calls from the Providence and Sharon churches in Mecklenburg County, he was ordained and installed as their minister on 9 Jan. 1857. There he served until called to the Presbyterian church in Salisbury. Installed on 24 Nov. 1860, he spent the rest of his life in that city.

In addition to his pastoral work, Rumple was a missionary chaplain to the Army of Northern Virginia for at least a brief period during 1863–65. He served on most of the important committees of the Presbyterian Synod and the Presbytery of Concord. In 1858 he was elected a trustee of Davidson College and served until 1905, when poor health forced his resignation; for a brief period he was the board's treasurer and for twenty-seven years, its secretary. From 1863 until his death Rumple was also a member of the board of trustees of Union Theological Seminary in Virginia. In 1888, when the Synod of North Carolina began planning for an orphans' home, he was named chairman of the committee; thereafter Rumple became the leader of and chief spokesman for this project until his death. In his honor, the principle building at the home, which was built at Barium Springs, was called Rumple Hall, as was a dormitory at Davidson College. As a tribute to his work for and interest in the church at Blowing Rock, it was named Rumple Memorial Presbyterian Church. In 1882 The University of North Carolina awarded him a doctor of divinity degree.

Rumple had an abiding interest in history. The author of A History of Rowan County Containing Sketches of Prominent Families and Distinguished Men (1881), he wrote articles on "The History of Presbyterianism in North Carolina" that were published in the North Carolina Presbyterian from 1878 to 1887 and a number of his historical writings appeared in other church newspapers. He also served as one of the assistant editors of Nevin's Encyclopedia of the Presbyterian Church (1884), to which he contributed many articles on the church in North Carolina.

Rumple married Jane E. Wharton of Greensboro on 13 Oct. 1857. They had four children: one who died in infancy; Watson Wharton, who died at the beginning of the second term of his senior year at Davidson; James Wharton Walker, who became a lawyer and was drowned in the Shenandoah River, Va., in 1893; and Linda Lee, who married the Reverend Charles Graves Vardell, D.D., founder and first president of Flora MacDonald College in Red Springs. Rumple died in his daughter's home after more than a year of ill health. His body was interred in the Chesnut Hill cemetery, Salisbury.

Samuel A. Ashe, ed., Biographical History of North Carolina, vol. 3 (1906), and Cyclopedia of Eminent and Representative Men of the Carolinas in the Nineteenth Century (1892).

Alfred Nevins, Encyclopedia of the Presbyterian Church in the U.S.A. (1884).